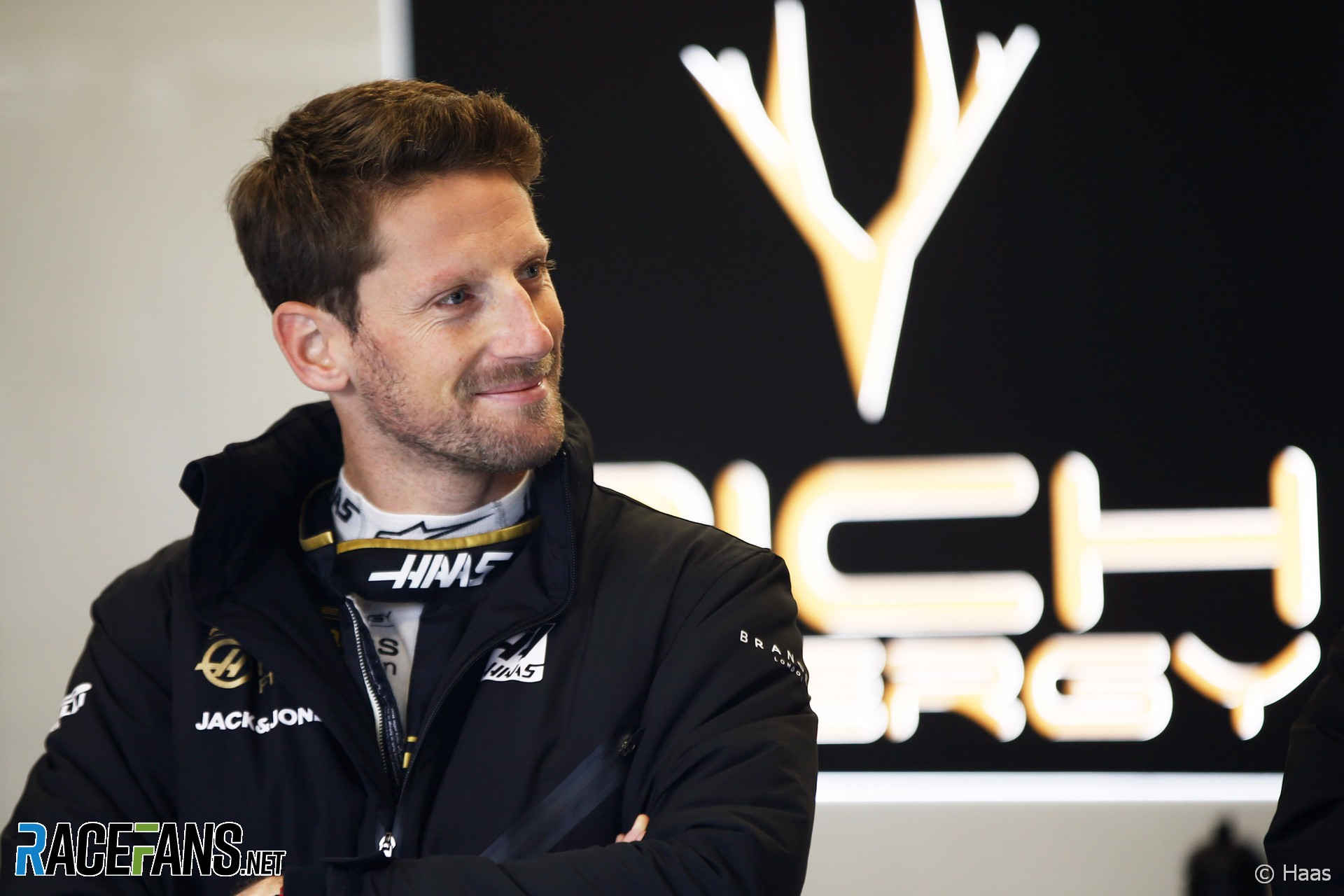 Romain Grosjean was born in Switzerland but races under a French licence – motor racing having been banned in his birth country in the 1950s.

He joined Renault as test driver in 2008 after winning the 2007 Formula Three Euroseries. Grosjean had previously been one of the team’s Development Drivers.

He began his rise through the ranks winning the 2003 Swiss Formula Renault series with ten wins from as many starts. He then moved to French Formula Renault and was seventh in 2004 (with one win) and champion in 2005 (ten wins). He also took two podiums in the Formula Renault Eurocup at Valencia.

Grosjean made his F3 debut at the blue riband Macau event at the end of the year – a demanding street circuit and not an ideal venue for a debut appearance. He took Loic Duval’s place in the Signature-Plus team, started 19th and finished ninth despite losing a several places on the first lap. He beat team mates Fabio Carbone and Guillaume Moreau and raced convincingly with many F3 regulars.

Stayed in the F3 Euroseries with Signature-Plus for 2006, the team hoping to recapture its form having switched from Opel to Mercedes engines. He ended the year 13th with only a single podium. But he also made an appearance in the British F3 event at Pau and won both races, from pole, setting fastest lap both times.

For 2007 he moved to the F3 Euroseries champions ASM, who had steered Lewis Hamilton and Paul di Resta to victory in the previous two seasons. He enjoyed little success in the two big F3 races of the year: he qualified on pole for the Masters of F3 race at Zolder, but stalled at the start and finished 14th, and was eighth in the Macau Grand Prix.

However he beat Sebastien Buemi to the F3 Euroseries title and bagged a testing role at Renault for 2008.

Over the winter of 2007/8 he became the inaugural GP2 Asia champion for ART, winning four times and beating Buemi with 61 points to 37.

He stayed with ART for the GP2 main series in 2008. He ended the year fourth overall win two wins – and lost a further two due to penalties. Switching to the Addax team for 2009, he won two of the first three races to take the lead of the championship, despite suffering a substantial crash in Monaco.

Grosjean cut his GP2 season short after Nelson Piquet Jnr was dropped by Renault and he was promoted to the F1 team in Piquet’s place, making his debut at the European Grand Prix.

This was an inopportune time for Grosjean to make his F1 debut, and not just because he had twice-champion Fernando Alonso as his team mate.

The recently-introduced testing restrictions gave Grosjean little time to drive the car. Worse, the team was in disarray following the expulsion of Flavio Briatore and Pat Symonds after the details Piquet’s deliberate crash to help Alonso win the 2008 Singapore Grand Prix had been exposed.

Grosjean struggled to impress during his time with the team. Usually qualifying near the back and staying there, he only really distinguished himself when he crashed in practice at Singapore – in exactly the same place Piquet had during the infamous race 12 months earlier.

He was not retained for 2010 as new management brought in Robert Kubica and Vitaly Petrov.

Grosjean began 2010 driving a Ford GT in the GT1 World Championship. He later raced in the Auto GP championship before returning to GP2 with DAMS. He signed for Gravity Sports Management and shortly afterwards was appointed by Pirelli for F1 tyre testing.

In 2011 Grosjean raced a full season in GP2 in 2011 with DAMS, winning the championship with three races to go. That convinced new team principal Eric Boullier to return him to the team from the beginning of 2012, alongside Kimi Raikkonen.

Grosjean’s first full season of Formula One showed promise but also a deal too much impetuousness. The defining moment came in Belgium, where he triggered a four-car crash which led to him being banned for one race. The severity of the punishment was due at least in part to the fact championship contenders had been involved in the incident.

This was bad enough, but when he caused another collision on the first lap in Japan his victim, Mark Webber, branded him a “first-lap nutcase”. Even then the unnecessary incidents did not abate – he ruined his race in Brazil by tangling with Pedro de la Rosa during qualifying.

This soured a season in which Grosjean also showed considerable promise. He regularly out-qualified his vastly more experienced team mate and scored podium finishes on three occasions. He was running second in Valencia when his alternator failed.

But the string of collisions clearly gave Lotus cause for concern. They waited until after the season was completed before confirming he would race for them again in 2013, and Grosjean was so relieved he emailled the team’s staff to thank them for the show of confidence. Grosjean’s second full season got off to a slow start and in Monaco a crash-strewn performance raised fresh questions about his performance.

But he raised his game from that moment on, and found another gear as Lotus introduced a revised, longer version of the E31 chassis. He took the fight to the dominant Red Bulls in Japan, where he led much of the race, and at the Circuit of the Americas, where he split them on the podium. An excellent recovery drive from 17th on the grid in India netted another podium finish.

That earned him a third full season at the team, now alongside Pastor Maldonado who arrived in place of Raikkonen.

However neither Lotus driver had much to celebrate after a gruelling 2014 season. The team began the year well off the pace with the E22, and just as the car was beginning to improve the mid-season banning of inter-connected suspension systems set them back again.

Grosjean impressed by putting the car fifth on the grid and bringing it home in eighth place despite a problem with its floor. He repeated the result next time out in Monaco, but that was the sum total of his points finishes for the year.

Unable to land a seat at a more competitive team for 2015, Grosjean remained at Lotus where the arrival of Mercedes engine promised a return to their previous form.

Lotus did raise their game – but the team’s growing financial problems presented serious problems for them in the second half of the year. Progress on the car slowed and at times their participation looked in doubt. On one occasion the team’s staff found themselves without hospitality at a race.

Against this background Grosjean’s third place finish in Belgium was a shot in the arm for the outfit. With Renault considering a return to F1 it was a timely reminder of the Enstone’s outfit’s potential. But with Renault waiting until after the end of the season to confirm their return, Grosjean gambled on a move to new, Ferrari-aligned outfit Haas for 2016.

While Spa marked the high point of the year, Grosjean had been emphatically the strongest of the two Lotus drivers throughout 2015. He out-scored Maldonado by a ratio of almost two to one, and out-qualified him 17 times in 19 occasions.

Few expected Grosjean’s switch to Haas to pay off as spectacularly as it did in the first two races of 2016. In Australia, after a race suspension caused when team mate Esteban Gutierrez was hit by Alonso’s McLaren, Grosjean rode his luck for a sixth-place finish.

In Bahrain he went one better using completely different tactics. Running an aggressive three-stop strategy he came home fifth. But from then on Haas only added a few points during the rest of the season, while Grosjean became increasingly frustrated with braking and tyre problems.

Nonetheless he committed to a turn for the team in 2017.