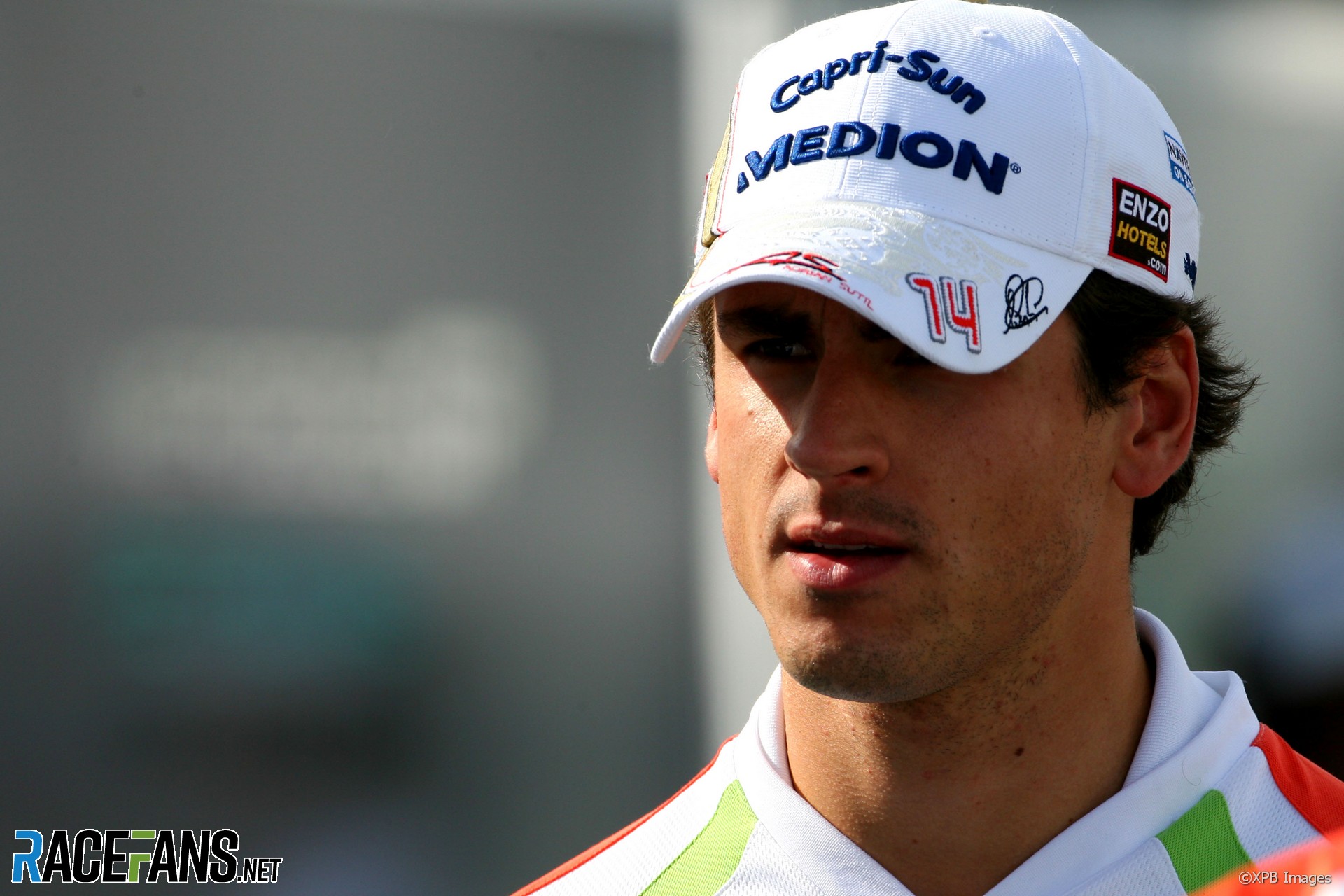 Adrian Sutil looked set to follow in the footsteps of his father until he discovered motor racing at the age of 14.

His father Jorge arrived in Germany from Uruguay and played violin in the Muncher Philharmonie. Adrian was born in Starnberg and shared his father’s musical talents and played piano, but began pursuing a career in motor sport after he started racing karts.

He stepped up to car racing in 2002 in the Swiss Formula Ford 1800 championship. It was a flawless start, with ten wins from ten pole positions in ten starts to give him the title. That year he also won five races in the Formula Masters Austria championship.

But there would be no wins for him the following year in the Formula BMW ADAC championship with HBR Motorsport, despite starting from pole position twice. He finished overall with 86 points to the 249 of champion Maximilian Gotz.

Nor did he make an enormous impression in his first season in the Formula Three Euroseries in 2004. In 20 races he scored on only two occasions and switched from the Kolles team to ASM at the final double-header round.

He finished 20th in the F3 Masters race at Zandvoort with Kolles.

Lewis Hamilton joined Sutil at ASM for 2005. The pair won 17 of the 20 rounds but Hamilton claimed the lion’s share with 15. Sutil also came second to Hamilton at the F3 Masters.

Nonetheless Sutil finished second in the championship, despite missing the final double-header round at Hockenheim where he was replaced by Gotz.

He was absent from that final race because of his commitments to appear for the German team in the inaugural A1 Grand Prix championship. In all he started six races in the 2005-06 season, retiring on four occasions and finishing 12th on the other two.

A move to the Japanese Formula Three championship with the Toyota-powered TOM’s team brought him success in 2006. In a consistent campaign he won five of 18 rounds but took another seven podium finishes to win the title with 212 points.

He made three testing appearance with the Midland F1-Toyota team at the European, French and Japanese Grands Prix (the team having been re-named Spyker at the time of the latter) thanks to his connections with team boss Colin Kolles from his F3 days.

Sutil said of Kolles: “When I met him the first time (in F3) he really believed in me, and he knew he did not have the best team in F3 but he said always: ‘I know you are a good driver.’ I am really, really happy to work with him again. He does everything in a very professional manner.”

For 2007 he was promoted to the race team alongside Christijan Albers in place of Tiago Monteiro in a multi-year deal.

Although Sutil made some typical rookie mistakes he was largely quicker than Albers, who was swiftly dropped. Sutil was fastest in the wet practice on Saturday morning at Monte-Carlo, and scored a point in the rain at Fuji Speedway.

Re-branded as ‘Force India’ the team did little better in 2008. Sutil was poised to grab a major points finish for the team at Monte-Carlo – until Kimi Raikkonen lost control of his Ferrari and smashed Sutil out of the race.

The team never came close to such a strong finish again, and with Super Aguri’s disappearance from the championship the VJM01s were often found at the tail of the field.

Sutil had a difficult 2009 despite enjoying the benefits of the more competitive VJM02. He was poised to score the team’s first points at Shanghai before spinning off the soaked track.

More incidents followed: a collision with Raikkonen at the Nurburgring, another with Nick Heidfeld in Singapore and another with Jarno Trulli in Interlagos.

Sutil was beginning to acquire a reputation for being accident-prone. But he showed great form at Monza, qualifying a career-best second and finishing fourth.

He built on that progress in 2010 with several points finishes, and consistently out-performed new team mate Vitantonio Liuzzi.

There were occasional wild moments, notably in Korea, but more often Sutil impressed with his wheel-to-wheel racing: defending his position from Hamilton in Sepang, putting an opportunistic pass on Sebastien Buemi at Valencia, and holding his own against Michael Schumacher on several occasions.

Paul di Resta proved a more challenging team mate in 2011 and the rookie driver regularly out-qualified Sutil in the first half of the year.

Although the more experienced driver had the upper hand over the full season, it wasn’t enough for him to hold onto his place at the team, and he was replaced by Nico Hulkenberg for 2012.

Sutil sat out 2012 and his conviction for injuring Eric Lux, CEO of Lotus owners Genii Capital, in a bar in Shanghai in 2011, cast doubt on whether he might return.

But he secured a comeback to F1 with his former team in 2013 after Hulkenberg switched to Sauber.

His return began promisingly in Australia, where he led his first race back, thanks in part to running an alternative strategy. But team mate Di Resta quickly established the upper hand at the team and out-scored Sutil 48 to 29.

However, at the end of the year, Force India did not retain either of their drivers.

Sutil was hired by Sauber for the 2014 season – the first time he had raced in Formula 1 for a team that was not the Silverstone-based outfit.

Racing alongside Esteban Gutierrez, it proved a fruitless season for both Sutil and Sauber with the team finishing in tenth place in the constructors’ championship ahead only of Caterham.

Sutil narrowly missed out on a point in Hungary, losing out to the McLaren of Jenson Button by less than a second. With younger drivers with more money waiting in the wings, Sutil found himself out of a seat at the end of the season once more.

At the start of the 2015 season, Williams appointed Sutil as reserve driver behind Valtteri Bottas and Felipe Massa. While he conducted simulator work with the team, he never got the opportunity to get behind the wheel of the team’s FW37 itself.

Sutil chose to leave Williams before the 2016 season to pursue opportunities away from the cockpit. He has not raced competitively since.