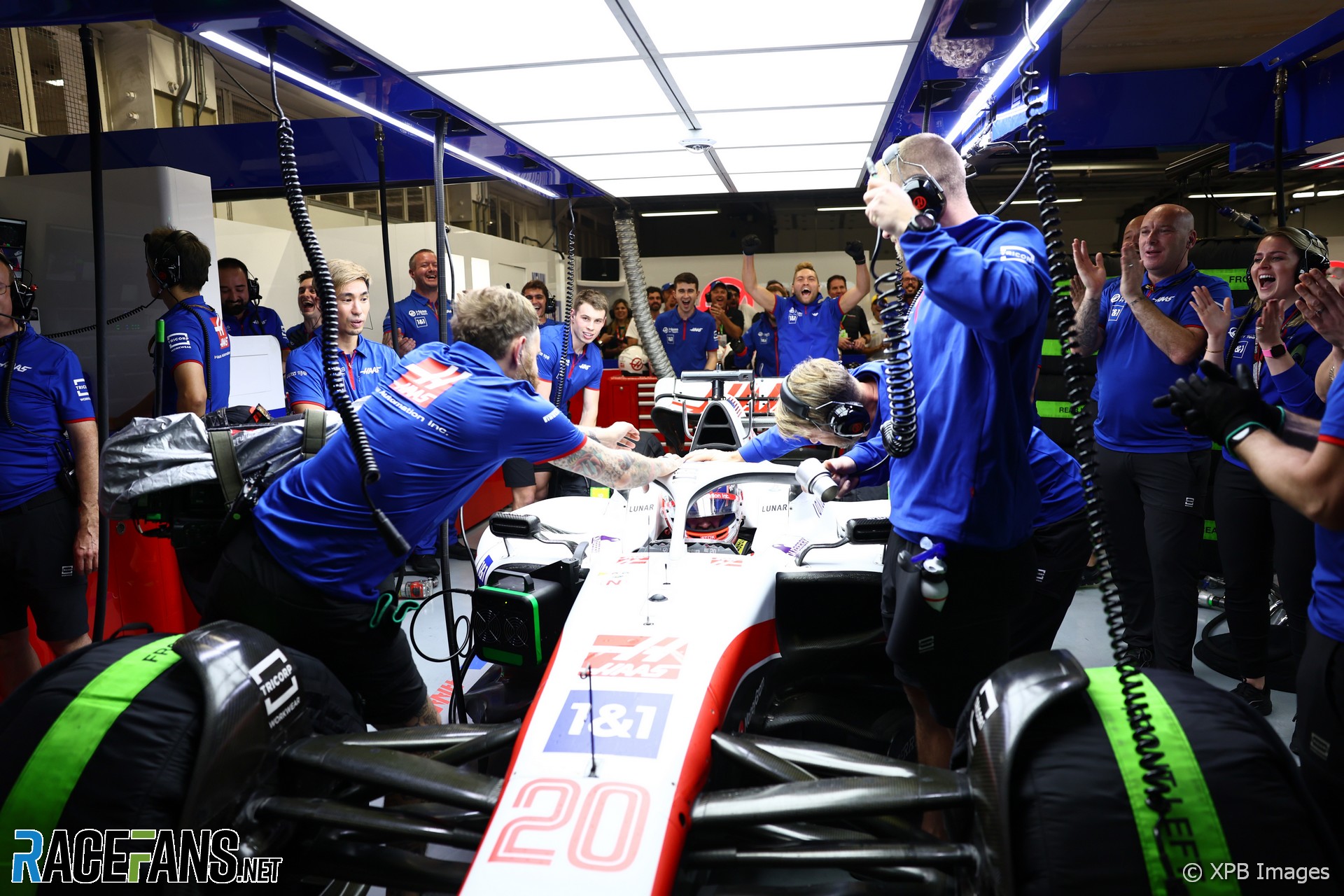 Following his points-scoring comeback in Bahrain, Magnussen’s form dipped around the middle of the season. But after changing race engineers he rebounded by scoring a shock pole position for the sprint race in Brazil.

Steiner said team’s first pole position in F1, achieved in a rain-affected session, was made possible by the effective combination of Magnussen and his latest race engineer, Mark Slade.

The pair previously worked together at Renault in 2016 and were reunited during the latter races of 2022. The returning driver began the year with race engineer Ed Regan, who then moved into an office-based role, and Dominic Haines served as an interim replacement before Slade took over.

“I think the combination with Mark Slade, his race engineer, it’s coming together,” Steiner said. “They have got a good relationship and they trust each other, I would say. So Kevin just had to think about driving, nothing else.”

The strong communication and trust between engineer and driver was critical to Magnussen securing pole position during challenging weather conditions in Interlagos, said Steiner.

“This lap was fantastic, but the whole qualifying, he always put the performance in each step: Q1, Q2, Q3,” lauded Steiner.

“And he believed what he was told, which tyres to use, and he could see in Q1 and Q2 we always picked the right tyre for him to go out there to be competitive.

“Then when it came to the money lap, he put it down there. There was another eight drivers who could have done the same thing because the distance between the rivals was not 10 minutes, it was seconds. So he just delivered when it was needed to.”

Magnussen said his surprise pole “really lifted everyone up” and showed the whole team that “anything is possible in this sport – although often it seems like it is impossible, it isn’t”.

That proved the final high point of Magnussen’s season. He dropped to eighth in the sprint race at Interlagos, still earning a point, but then was spun out of the grand prix by McLaren’s Daniel Ricciardo.

At the season finale in Abu Dhabi a week later he finished a lapped 17th. Magnussen had been eliminated in the first round of qualifying, bumping back down to earth following the high of Brazil.

“It was a nightmare with traffic,” Magnussen explained. “I was out of the garage the third-last car on the grid, so that meant I got the worst part of the traffic. We did that really well [in Brazil] to get out as the first car, and then this week we were almost last.”

The only positive Magnussen could draw from his last weekend that Haas had finished eighth in the constructors’ championship after coming last in 2021. He made the largest contribution to that, ending the season 13th in the drivers’ championship on 25 points, just over double the tally of younger team mate Mick Schumacher.

Some chances for better results were missed, Steiner admitted. Although Magnussen enjoyed a strong start to his second F1 comeback with a fifth place, he missed out on strong results multiple times in 2022 by losing positions in early battles and being a regular recipient of the black-and-orange mechanical warning flag after suffering early damage. Then both he and Haas had a difficult run of races that cost the team the opportunity to fight Alfa Romeo and Aston Martin for sixth.

“When he came back in, he scored points on the first [race],” Steiner explained. “He had the team behind him. And then I would say at just after the summer break he struggled a little bit, and we don’t really know why. But then he came back.”

However Steiner believes this inconsistency is part of a wider problem Haas need to tackle.

“We need to get the ups and downs out of the team, I wouldn’t say only of Kevin. We need to analyse why we have so much up and down.”

During his year out of F1 in 2022, Magnussen became a father and has credited that change in his life for the approach to his return. Steiner believes Magnussen handles being in the sport better now than he did before.

“He’s just matured by getting older,” Steiner explained. “We all get calm more and see things sometimes a little bit different.

“He’s most of the time very relaxed about things. And now, with the combination of Mark now with him, I hope in the future we will see even a better Kevin.”