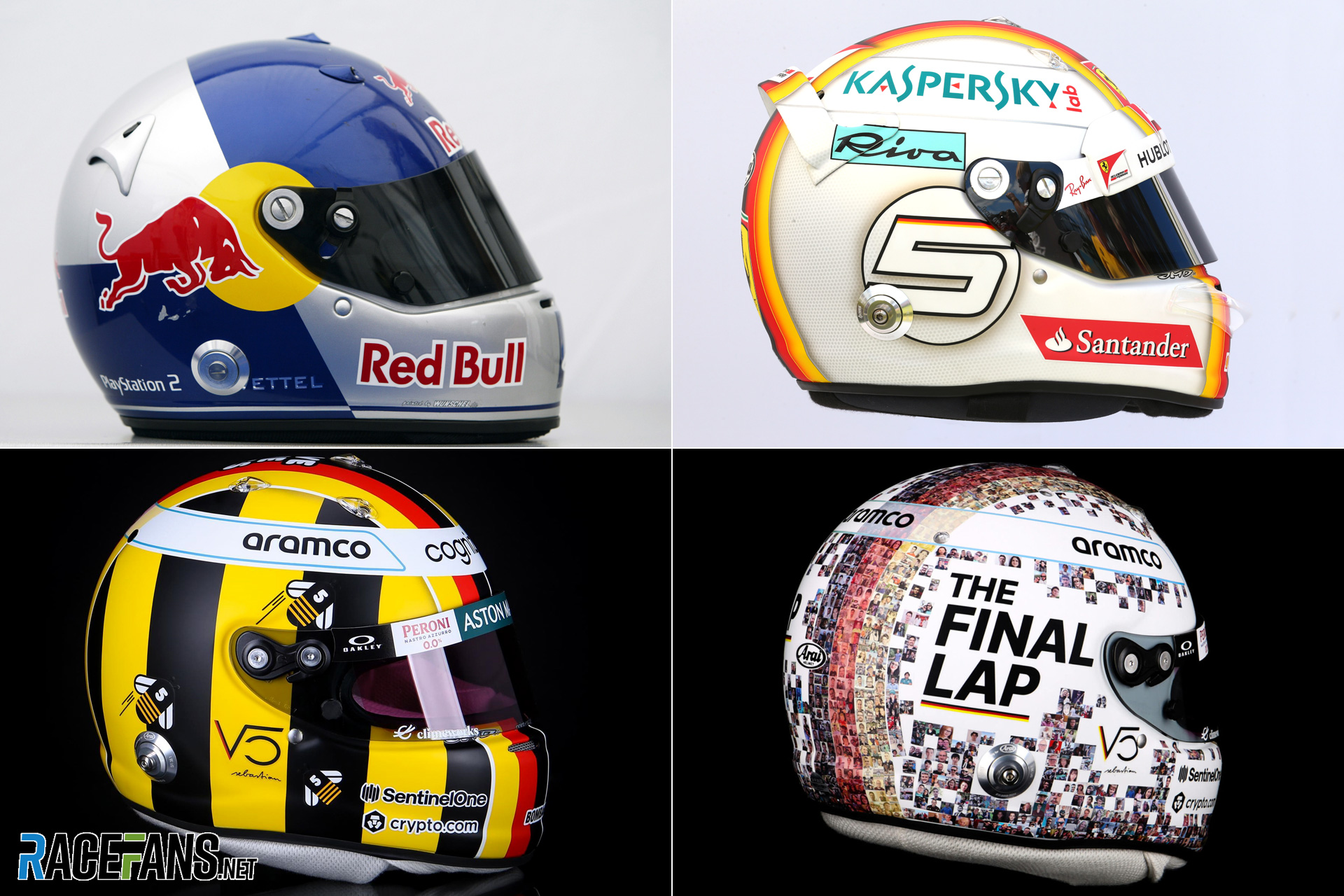 Sebastian Vettel’s many helmet designs have provoked controversies, changes in the F1 rules and even political rows.

Since entering F1 15 years ago, up until his retirement from the sport after today’s Abu Dhabi Grand Prix, Vettel has been through far too many different designs to cover in a single article. Here are a few of his most memorable designs.

Vettel was backed by Red Bull from a young age, and wore their colours when he graduated from karting to racing cars. Having placed second in Germany’s Formula BMW series in 2003, he routed the field the next year, winning 18 out of 20 races and scoring 387 points from a possible 400.

Vettel arrived in F1 as a test driver for BMW Sauber, and made his first appearance in a practice session at the 2006 Turkish Grand Prix. His grand prix debut followed at Indianapolis in 2007, as a one-off substitute for the injured Robert Kubica. He finished eighth, scoring a point.

His impressive debut for BMW convinced Red Bull he was ready to step up to their junior team, then called Toro Rosso. Scott Speed was dropped from the team’s line-up at the European Grand Prix, and Vettel took over his car at the next round in Hungary.

Vettel stunned by winning a soaked Italian Grand Prix for Toro Rosso, and Red Bull needed no further persuasion to promote him to their main team. For his final race at Interlagos he sported a helmet paying tribute to his team members, a gesture he has made on several occasions since.

At Red Bull, Vettel developed a habit of frequently changing his helmet design. This early Monaco special was conservative compared to some of the more outlandish looks which followed.

Another appearance of Vettel’s team members on his lid during his dominant 2011 campaign, which delivered his second world championship.

Vettel often chose the Singapore night race to display some of his more eye-catching designs.

By 2012 he was a two-times champion, as this gold design pointed out.

Following Vettel’s debut in the United States Grand Prix the event dropped off the Formula 1 calendar. It returned at an all-new venue, the Circuit of the Americas in Texas. Despite being in the thick of a tense fight for the world championship with Fernando Alonso, Vettel broke out yet another special design to mark the occasion.

He chose a pin-up calendar look for that year’s Monaco Grand Prix. By now some within the sport were voicing concerns over how regularly Vettel and other drivers were changing their helmet design, claiming it made them hard to identify on the track.

More faces at Silverstone in 2013.

For F1’s second race in Texas, Vettel held a helmet design competition, which was won by fan Rolf Carsjens.

Vettel signed off his fourth consecutive championship-winning season in style, claiming a record-equalling ninth win in a row at the Brazilian Grand Prix, sporting this cartoonish number.

The first year of F1’s V6 hybrid turbo regulations was a tough one for Vettel, who failed to win a race. Monaco was one of several disappointing races: He retired early with turbo trouble, giving the fans little time to appreciate his latest look.

In his last race as a Red Bull driver Vettel paid tribute to the team which had made him a multiple world champion with the word ‘Danke’ – ‘thanks’ – in their logotype on top of his helmet.

It was all change for Vettel’s helmets in 2015: Or, rather, much less change.

The FIA had finally given way to the grumbles over drivers’ helmets and banned them from changing their styles from race to race. Vettel and his team responded thoughtfully to the changes.

His move to Ferrari inevitably meant the Cavallino Rampante replaced Red Bull. He also switched to a white design which allowed him to make small adjustments to the style without incurring the regulator’s wrath. A bold German flag became a fixture in his new look.

His switch to Ferrari quickly paid off: He won his second race for the team in Malaysia, wearing this helmet.

After a successful first season with Ferrari, 2016 proved a win-less disappointment. He continued to adapt his helmet style as far as the rules allowed, however.

The tighter rules on helmet design did permit drivers to introduce one special design per season. Vettel gave his Monaco helmet for 2018 a retro look.

Pushing the boundaries of the helmet design rules wherever possible, Vettel used the lining of his lid for a stars-and-stripes design at the 2018 United States Grand Prix.

Wearing a special lid reflecting the lights of the night race, Vettel claimed his final grand prix victory in Singapore that year.

The ban on drivers changing their helmet designs lasted five years. It was lifted in 2020, which also turned out to be Vettel’s final year as a Ferrari driver.

Finally able to tweak his design as he pleased once more, Vettel increasingly used his helmets to give voice to his concerns over the climate and support for social justice. When F1 returned to Turkey he swapped his usual German tricolour for a pride rainbow and added the slogan “together as one”.

Vettel’s hopes of winning the world championship with Ferrari were never realised, and he drove his final race for them at Yas Marina in 2020.

After moving to Aston Martin, Vettel generally sported helmets in the bright pink colours of sponsors BWT, though he continued to draw attention to environmental and other concerns.

His helmet for the final race of 2021 showed the breadth of Vettel’s advocacy for equality and for more environmental awareness.

When Russia invaded Ukraine early in 2022, all the drivers indicated their opposition to war. Vettel put the same message on his helmet, though he had to make an adjustment to the design following a complaint over one of the flags he had included.

Vettel has become an increasingly passionate advocate of his causes as his career has gone on. His choice of helmet for the 2022 Canadian Grand Prix was confrontational, accusing the country of committing “climate crime” – a bold statement to make given his team’s association with Aramco, described as the world’s biggest polluter, whose logos also appeared on his helmet.

This drew criticism from some local politicians, which Vettel responded to by admitting his statement was hypocritical. But, he said, “it’s disappointing that we break it down to a personal level and miss to look at the bigger picture.

“What’s really important is the message that we need to make the switch and get out of fossil [fuels] and start to base our whole lifestyle on renewables.”

Having worn the helmet in practice, Vettel chose not to use it in the grand prix itself.

As part of his environmental activism, Vettel took a group of schoolchildren to build a ‘bee hotel’ at the Austrian Grand Prix, making his choice of helmet colours for that weekend an obvious one.

Red Bull co-founder Dietrich Mateschitz passed away on the eve of the United States Grand Prix this year. At the following race Vettel, who arrived in F1 thanks to the team’s junior driver programme, revived his original helmet design, swapping the ‘Red Bull’ wording for ‘Danke Didi’.

For his final Formula 1 race, Vettel invited fans to bid to put their faces on his helmet. He said all the proceeds from the auction will go towards supporting his environmental projects.