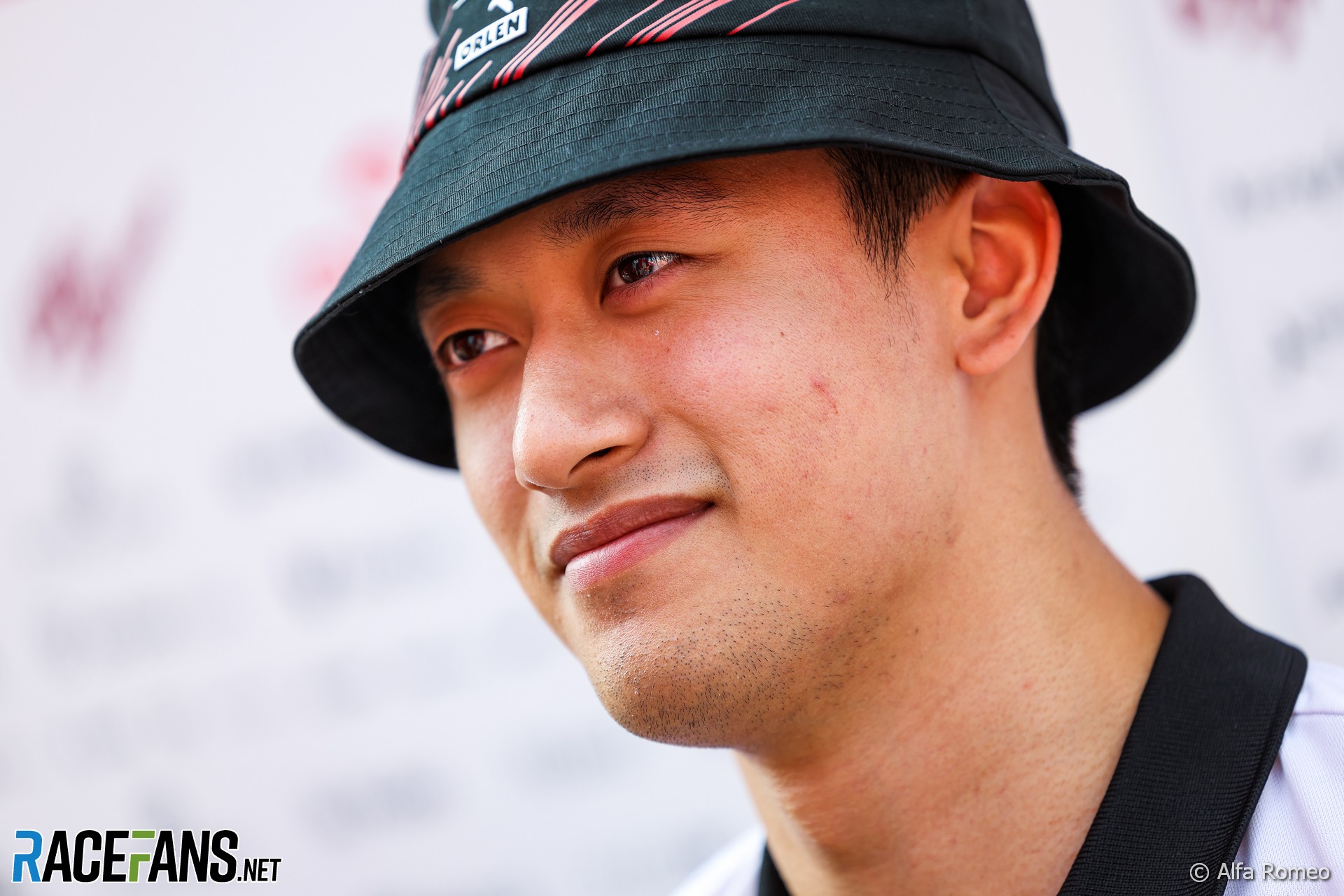 One of the strongest indicators of Alfa Romeo’s confidence in their rookie Zhou Guanyu was not the fact that earlier this week they signed the Chinese for a second season, but that the news had been anticipated since the summer break.

That is normally the peak of the Formula 1 silly season, and it certainly proved to be this year with the drama at Alpine and McLaren. Zhou was not the only contender for the seat in 2023, yet he could feel more confident of staying on the grid than several more established drivers.

A glance over Zhou’s results in his first 16 F1 races may not suggest he has had a spectacular season. Yes, he scored a point on his debut, but he has only finished in the top ten twice since and reached Q3 just once. That career-best qualifying performance at Silverstone was almost immediately undone by a huge crash – one for which the rookie was blameless.

But he bounced back from that, getting closer to Valtteri Bottas’s pace in the other Alfa Romeo. Zhou out-qualified his team mate in the Dutch Grand Prix, leaving Bottas curious at how Zhou dialled out oversteer in the higher-speed corners.

Zhou came out on top between the two in qualifying again at the Italian Grand Prix. More importantly for Alfa Romeo, he converted his ninth place on the Monza grid (thanks to power unit penalties for several drivers) into 10th place in the race and his team’s first point since June’s Canadian Grand Prix, when he also scored. Over the past nine races, 10-times grand prix winner Bottas has only contributed one point more than Zhou.

Alfa Romeo have fallen down the pecking order over the course of the season. The team was at their most competitive at the beginning of the season when Zhou was new to F1, could not rely as much on his team’s experience due to how radically new the 2022 technical regulations were, and was visiting a series of unfamiliar circuits.

Yet two of Zhou’s best results came in Jeddah and Melbourne in the races immediately after his debut, showing he was quick to learn and adapt. That’s a trait that he has carried throughout his car racing career.

In Formula 4 he reached the podium in his first two races, then in the Italian championship won all three races on his first visit to Monza early in the season. But he was a less frequent visitor to the podium after that and was a distant runner-up to champion Ralf Aron.

Zhou stepped up to FIA European Formula 3 and reached the podium twice in his first five races, but then went 35 races before finishing in the top three again over a year later. His third season in the series, against a top-class field, began with his maiden win and at Zandvoort he was on the podium in all three races. But in the second half of the campaign he faded from second to eighth in the standings.

The pattern continued in his three years of Formula 2 with Virtuosi Racing. Zhou seemed to adapt seamlessly to the high-downforce and power steering-free cars, setting the fastest lap on his debut, reaching the podium by his fifth race, getting three more podiums and a pole position in the next eight races. But again he struggled to build on that early potential.

It looked like he had made a jump when the 2020 season began, as he claimed a dominant pole at the Red Bull Ring, but his race results ended up being little better than the year before. In 2021, often with the fastest car on the grid, Zhou improved again but not by enough to become champion. Yet he was promoted to F1 over the drivers who finished ahead of him in F2.

But as McLaren-bound Oscar Piastri, the driver who beat him to F2 title as a rookie, recently said: “Once you get into F1, it’s very much about how well you can do in F1 rather than what you’ve been able to accomplish previously”.

So it was understandable, particularly with the significant backing that Zhou has benefited from through this career and the F1 test mileage he got off the back of it, that there would be doubters of if he was deserving of an F1 seat. His nationality undoubtedly strengthened his hand in the hunt for a drive, raising not only the profile of Alfa Romeo in China but F1 too. Sceptics dismissed Zhou’s promotion to F1 as a nationality-based hire. Some persisted with that view when his 2023 deal was announced, though neither his team nor F1 have had an influx of Chinese sponsors since Zhou’s debut.

Zhou’s primary backer SECA – China Media Capital – had long been understood last year to have put €30 million of investment capital to the side under the consideration that it could be used in F1 for 2022. That was never specifically for sponsoring Zhou’s F1 ambitions, but at least a portion of it did end up going towards his drive and so a ‘pay driver’ label immediately stuck.

But he has proven on-track he can be a safe and competitive pair of hands. He’s immersed himself into Alfa Romeo in a way that team principal Frederic Vasseur and head of trackside engineering Xevi Pujolar have frequently praised and Bottas has made reference to as well.

Bottas’s own approach in handling Alfa’s dwindling competitivity on-track (incidents and unreliability notwithstanding) and with the media has provided a great example to Zhou to look to and be as mature with his response. There’s a productive and enjoyable working relationship across the team that everyone wants to continue, so keeping on those players for 2023 makes the most sense.

But F1 is a game where you always have to be pushing forward, relentlessly, and Zhou needs to prove he’s capable of staying at the pace of the current. He’s got to show he can build on his impressive rookie season to date regardless of where Alfa sits in the order next year, as excelling in a back-of-the-grid car is just as valuable to his team as trying to match Bottas in a more competitive package.

Alfa brought fewer updates to grands prix than its rivals in the middle of the season, and their drivers commented on how pleased they were to still be fighting other cars while they were out-developed. As soon as a reprofiled floor arrived for the Hungarian Grand Prix, Alfa’s performance improved, and, despite it not being added to his car at that race, Zhou said “it was one of the better days in dry conditions for me” as he qualified 12th.

Of the five times Zhou has failed to meet the chequered flag in a race this year, four were down to mechanical failures, and the other was his huge Silverstone crash. During Alfa Romeo’s most competitive period of the season in spring, Zhou suffered separate water pump, power unit and hydraulics failures in races, plus another undisclosed race-ending fault in France.

He was not only let down by his car, but lost crucial learning miles early in the season that may have put him in a stronger position now had he been able to do full race distances.

The trend may be that there’s so much to learn in F1 that his development rate is not going to slow or stutter like it did in lower categories, and he’s performing at a high enough level to convince Alfa Romeo of keeping him over the other drivers they had in contention for his seat. But a super-strong end to 2022 will not make Zhou any more deserving of his new deal: At the end of the day his next contract, and his medium-term F1 future, are all about the 2023-spec Zhou that Alfa is expecting to see.