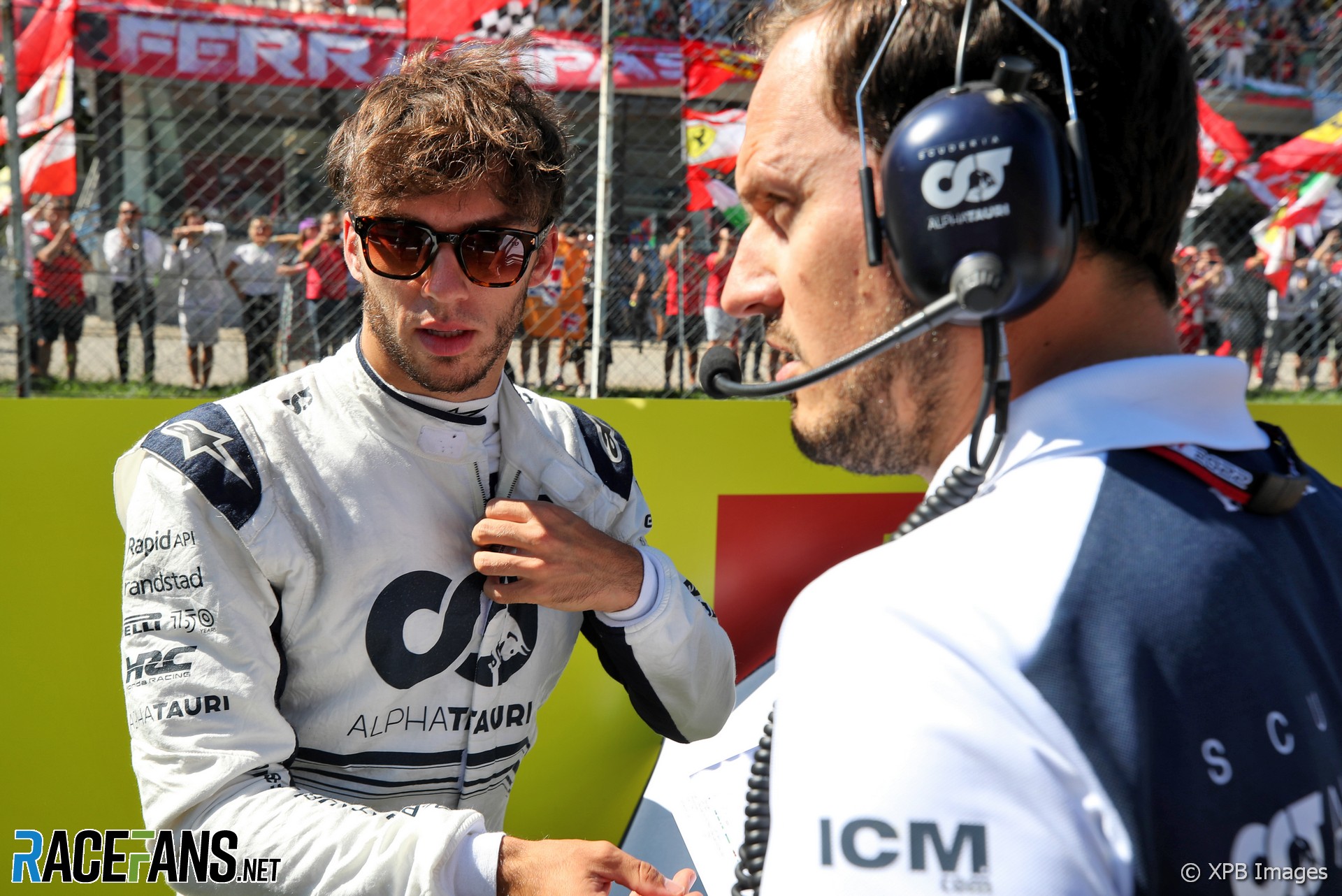 “I think it’s P7, unless I’m stupid.” At least Max Verstappen knew where he would start the Italian Grand Prix after qualifying second-fastest but copping a penalty for a power unit parts change.

But not everyone was clear. Fernando Alonso, for example, was also convinced he would start seventh.

Most drivers were left baffled after Saturday’s session as nine of them – almost half the grid – collected penalties. While the Red Bull driver only had a five-place drop, after taking his fifth V6 internal combustion engine of the season, eight others had combination of drops and instructions to start at the back of the grid. That left teams and drivers without definitive answers as to who started where until hours after the session.

So what hope did the fans have of knowing where they would all start in the meantime? The FIA released its provisional grid almost four hours after the session ended.

Grid penalties for using too many engine parts are not new. They were introduced in 2004, when teams were first limited to one engine per car per weekend. However, the power unit penalty system really started to become a major factor after F1 introduced its complex V6 hybrid turbo engines at the start of 2014.

Today, to prevent excessive spending, teams are limited to three internal combustion engines, three turbochargers, three MGU-H, three MGU-K, three energy stores, two control electronics and eight exhaust systems a season. Simply put, if you exceed your allocated amount of any of these, you pick up grid penalties. Penalties range between five or 10 place penalties, but if a driver exceeds 15 places in a single round, they start that race from the back of the starting grid. Unless someone else does too, which is where things start to get complicated.

Strategically, Monza and Spa present prime opportunities to take additional parts. The long straights give drivers in faster cars a great chance to carve their way through the field if they start from the back, as Sunday’s race demonstrated. Increasingly, a spate of penalties occur at these two rounds.

Many drivers, who spent much of the hours after qualifying on Saturday poking fun at the system on social media, concluded something must change.

Esteban Ocon was vocal with his thoughts on penalties after he qualified P14 after picking up a five-place grid penalty.

“It’s a bit hard to understand, maybe if we allocated one more engine for everybody, they would be nice,” laughed the Alpine driver after qualifying in Italy. Asked if he believed the penalties were getting out of hand, he replied: “I think so. No manufacturer manages to get such few parts for the whole season.

“We are doing too many races and it’s just not possible. It’s probably something for the FIA to review for next year. Up the number of parts a little bit.”

The 10 teams are clearly having a hard enough time completing 22 races without exceeding the power unit limit. But it looks set to get even more difficulty: The 2023 F1 calendar is widely expected to include two more rounds with no increase in the number of power unit parts.

Speaking on Saturday, with his driver Lewis Hamilton starting at the back after taking a new power unit, Mercedes team principal Toto Wolff acknowledged the system’s shortcomings but pointed out it exists for a reason.

“If there were no grid penalties, we would have qualifying engines, and not five, but 20,” he began. “The big teams would spend what they want in order to have an advantage. That’s why there needs to be a certain factor that limits that and avoids that.

“Has it gotten too complicated? For sure. But still we don’t want to have an arms race on engines being brought, because whatever freedom you give us, we will do with it even more strategically because it’s only five places or 10 places. We’ll blow an engine every race because it’s going to be three times quicker than the one before, so there needs to be a certain deterrent.”

The power unit penalty system is a difficult concept to explain to the many new fans F1 has successfully attracted in recent years. For all the fine work F1 has done broadening its appeal, explaining why it took so long to work out the starting positions for one race can only be a turn-off.

Pierre Gasly qualified ninth but wasn’t sure where he’d start immediately after qualifying – he eventually lined up fifth. He pointed out that the rise in teams taking grid penalties tactically messes with the “DNA” of the sport.

“You know you’re getting a penalty and you time it strategically depending on what other guys are doing,” he explained. “Some guys took five places here because some of the guys took back of the grid, so it made sense. I just feel like this should not be part of the DNA of racing.

“At the end of the day, when you look at qualifying, the fastest guy starts ahead on the grid for the race on Sunday, and that’s the way it should be.”

Mercedes’ George Russell, who was promoted from sixth to second last weekend thanks to various penalties ahead of him, described the system as a “double-edged sword.”

“We’re trying to be more sustainable in F1, cutting down the number of parts of engines we use across a season, and we have more and more races,” Russell said.

“We have three engines to take us through 22 races – I don’t know how many kilometres that is running flat out on a single engine, but it’s a huge amount. It’s normal there are going to be failures along the way.

“I’m sure F1 will have a bit of a rethink after this.”

But there are some who see the penalties as a feature of the modern sport, rather than a fault, such as Lando Norris. “It’s the same question we get every year,” he stated, adding he believed the jumbled-up grids “just makes it more interesting.”

Is there a middle ground F1 could find which would prevent teams excessively taking new engines? One which wouldn’t leave its own drivers publicly poking fun at the fact that they’ve been penalised more places than there are spots on the grid?

At the very least, those running the show need to make sure there is at least some indication of where everyone will start once qualifying finishes and stop leaving millions of fans – not to mention the drivers themselves – scratching their heads.

71 comments on “‘This shouldn’t be part of the DNA of racing’: Drivers tire of grid penalty confusion”