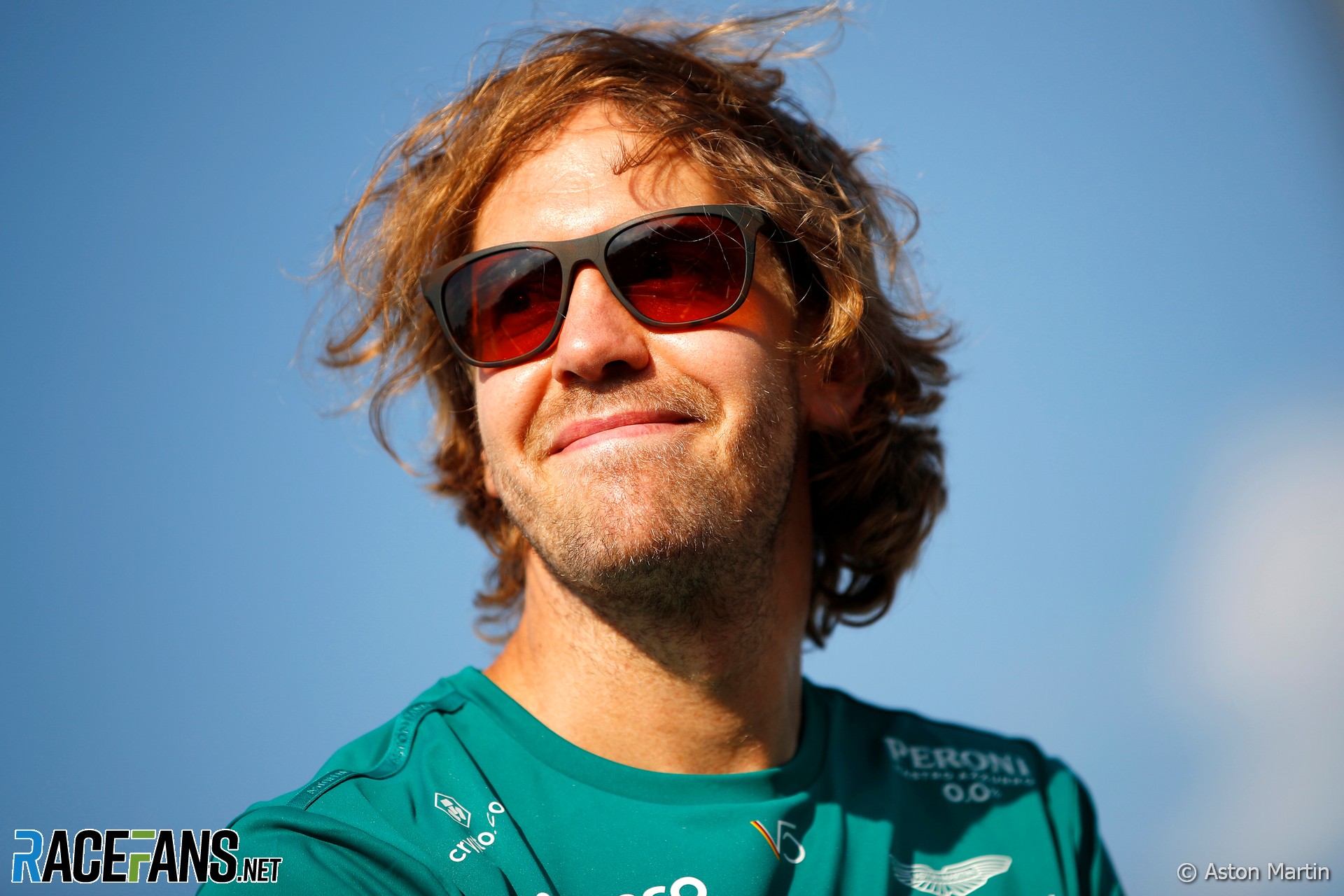 Last Wednesday, just over three weeks after his 35th birthday, Sebastian Vettel decided to call time on his Formula 1 career.

He is one of the most successful drivers in the sport’s history. Only two drivers – Lewis Hamilton and Michael Schumacher – have scored more than his 53 grand prix victories. Juan Manuel Fangio joins that pair as one of only three drivers with more world championships than Vettel’s four.

He could have carried on several years more. But for years Vettel has been weighing his desire to keep racing in F1 against his wish to spend time with his family – and his fears for the future of the planet. Now the balance has tipped, and this weekend’s Hungarian Grand Prix will begin a 10-race countdown to the end of a storied career.

Vettel has made his growing concern for the state of the environment increasingly clear since he joined his current team Aston Martin from Ferrari at the beginning of last year. That has inevitably stood in stark contrast to his occupation, a fact he has freely acknowledged, frankly describing himself as a “hypocrite”.

Speaking to RaceFans and other media at the Hungaroring yesterday for the first time since announcing his decision, Vettel explained how it was influenced by his increasing awareness of the dire threat climate change presents to the planet.

Within the space of a few years, Vettel has gone from being an occasional agitator for F1 to ditch its efficient V6 hybrid turbo power units in favour of thirsty V12s to demonstrating the potential of sustainable fuel, organising post-race litter collection and teaching schoolchildren how to build bee habitats. He is certain that his departure from F1 will make no difference to how seriously it views the threat of climate change.

“When it comes to the climate crisis there is no way that F1 or any sport or business can avoid it because it impacts all of us,” he explained in response to a question from RaceFans. “So maybe it will be pushed back or maybe it will be more quiet. But it’s only a matter of time, that we don’t have.”

He is by no means the only environmentally-conscious F1 driver – Lewis Hamilton has used his huge social media following to spread similar messages for years. Nor is environmentalism the only cause which Vettel has leant his support to: In Hungary last year he spoke up in support of the country’s LGBTQ+ community following the passage of homophobic legislation.

But for any competitor in a sport which is invariably characterised as “gas-guzzling”, promoting environmental causes is inevitably fraught with contradictions. Vettel has grappled with those as he has grown increasingly concerned about the planet’s future.

“I think the biggest part is probably if you look at Lewis or myself, we’re older now than we were 10 years ago – which is the same for you and everyone in this room – and I think there’s just a normal sort of progression

“We have the immense privilege of travelling the world, seeing so many things. And if you don’t ignore everything, then it does something to you. I’m not a standing-out example, I look at my friends around me and their thoughts are very different to what I remember the thoughts they had when they were in their early twenties. So I think part of it is just normal.”

He sees F1’s new generation of twentysomething drivers – Max Verstappen, Charles Leclerc, Lando Norris, George Russell – and notes how their generation will be forced to make more compromises to their lifestyles due to the growing concerns over the environment.

“What hurts me is that people like George, Lando, Charles, Max – they don’t have the same freedoms as maybe Lewis and I had. And whoever is coming after them will have even less freedoms because it will be more and more central and dictating more and more the way we are living and have to adapt our lives.

“That I don’t think is fair and I’m prepared and ready to fight for this sort of justice and fairness to have the same, for the kids that are go-karting today, to be able to have the same racing career that I had.”

Vettel admitted his concern over the environment and the impact he had upon it by being an F1 driver was “one of the factors that definitely played a role” in his decision to leave. “I can’t give you a number in terms of percentage, I think that would be silly.

“But for sure seeing the world changing and seeing the future in a very threatened position for all of us and especially for generations to come, I understand that part of my passion, my job is coming with things that I’m not a fan of.

“Obviously I’m travelling the world, racing cars, burning resources, literally. [They] are things that I cannot look away from one. I think [once] you see these things and you are aware then I don’t think you can really un-see it.

“It’s not the main factor, like I said, it is a combination of many things, but it is also part of the the driver behind it.”

He has said before and reiterated yesterday “I don’t mind the people calling me a hypocrite because I know that I am” because his views and his occupation are in such sharp conflict. “I don’t need to be told.”

But that feeling of hypocrisy has not driven him out of F1, he said. “It’s not about how much of a hypocrite you are or you’re not,” he explained. “It’s more, I feel, how much you can do. Some of us can do a lot, others can do very little, but it all makes a difference.

“It wouldn’t be fair to sit here and just say that as an excuse and it would be also the wrong driver behind the decision like that, because I’ve done this my entire life, it’s been the centre of my life for so long.”

If his concern over the environment is a ‘push factor’ driving him from F1, a ‘pull factor’ is his desire to be with his young family. “My children they are literally growing every day: My family and other interests, other things that I would like to spend more time on.”

However he admits he cannot say at this time whether spending more time on these things will prove “satisfying enough” in his life after F1.

“I don’t know. Time will tell. I think always when you decide to head into a different direction, you don’t really know what’s waiting for you behind the corner. But I’m very curious to find out and more curious to find out what’s next then hanging on to what’s now.”

Hamilton has used his popularity as a means to spread awareness of the issues closest to his heart, but he isn’t ready to call time on his F1 career yet. Vettel did not want to draw out his career simply because it gave him a platform to advocate the changes he wants to see, though he admitted it crossed his mind.

“Obviously I thought about that as well. Maybe yes, maybe I will lose voice and reach. But to me, voice and reach have never been up at the foreground. It has always been sort of the message because it’s what I really believe in.”

While he acknowledges there is much about the state of the environment to be concerned about, Vettel also sees room for optimism, and is now looking to channel the focus, energy and determination which made him one of the most successful F1 drivers ever into bringing about positive change.

“I do see that we are facing the biggest challenge humanity has ever faced. And if we don’t win this race then the world will keep spinning, but without us.

“I’m into the subject and I think once you become aware, it’s maybe also a little bit the character you grow to when you are always trying to find the next thing and the next thing, trying to be curious about what could make you faster, what could give you the edge. It’s the same sort of characteristic that made me look for more answers, ask more questions, and it leads onto the next thing.

“By realising how big the challenge is, I think there’s a big temptation to get into a negative spiral and to sort of panic and become very anxious about the future. But at the same time I’m reading a lot about it and hearing a lot and meeting a lot of people that are shifting the world in the right direction and making the world a better place and really fighting, committing and sacrificing their lives even to make it a better place in the future.

“So there’s plenty for us to be done, but I think in the foreground that’s always been my beliefs, not an agenda or campaign.”

41 comments on “‘It hurts me people like Charles and Max don’t have freedoms I had’: Vettel explains F1 exit”