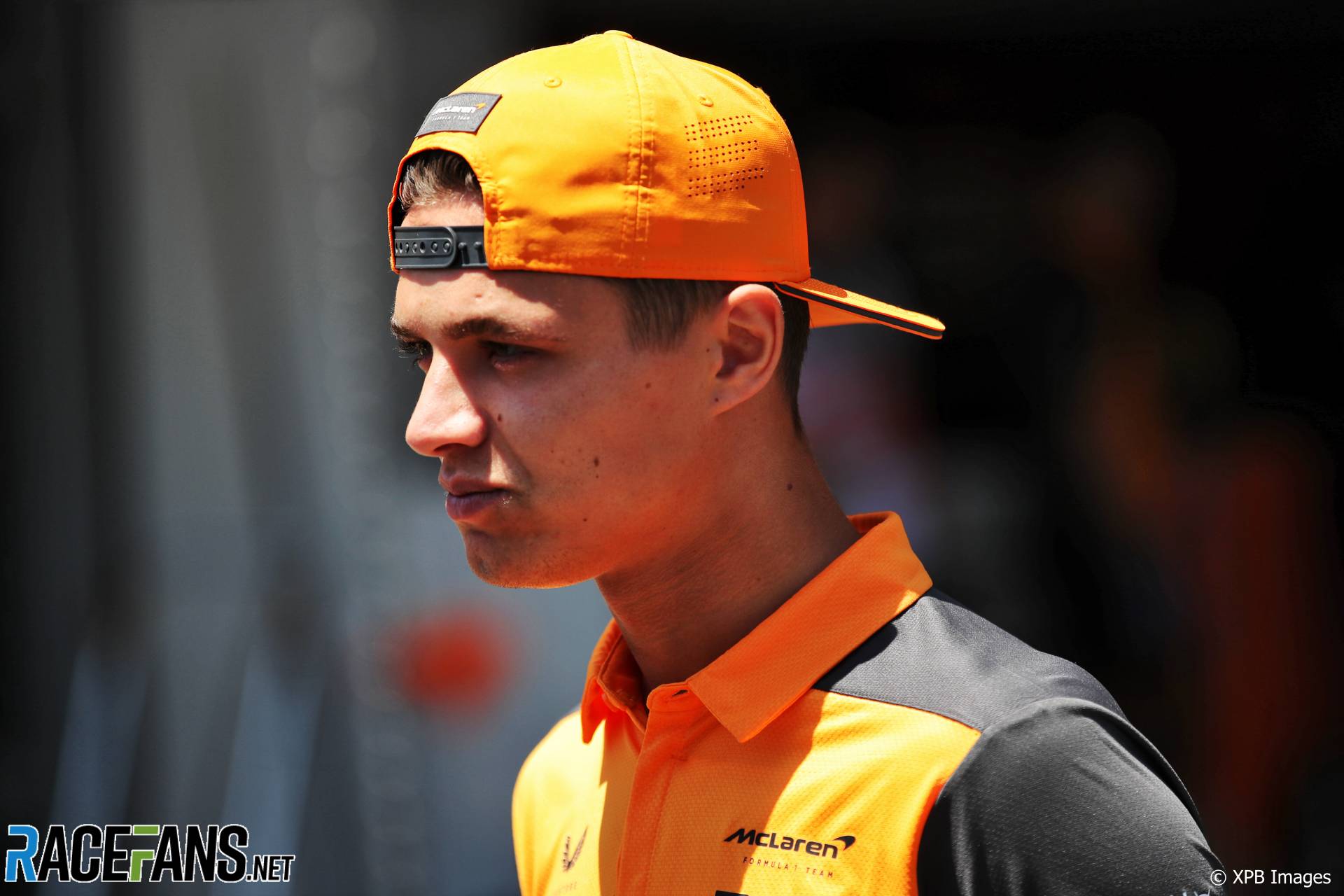 Formula 1 drivers should not be able to hinder their rivals during qualifying, Lando Norris and others claimed after last weekend’s race in Azerbaijan.

Fernando Alonso was accused of deliberately driving slowly during qualifying by Alexander Albon. The Alpine driver ran ahead of several cars on his final run in Q1, then drove into the escape road at turn 15, bringing out the yellow flags which prevented those behind him from being able to improve their lap times.

Two weeks earlier in Monaco several drivers were unable to set times at the end of Q3 when Sergio Perez and Carlos Sainz Jnr crashed. Similar problems have occured repeatedly on tracks with limited run-off.

This has prompted some to call for F1 to adopt rules used in IndyCar and other series where drivers who cause yellow or red flags in qualifying have one or more of their best lap times deleted, to ensure they cannot benefit from their error. Norris believes F1’s rules need to be tightened up in this area, especially for drivers who may have intentionally tried to compromise their rivals.

“I was one of the guys who caused the yellow [on Saturday], but just to get out of the way of Seb [Vettel],” he said. “I think there’s a difference between people doing it by accident – and people doing it to get out of the way of people by not causing blue flags and whatever when you’re in qualifying business – versus people who quite obviously do it on purpose. Especially when you’re one-and-a-half seconds down on the push lap.”

However Norris admitted such a rule would add to the loss incurred by any driver who made a mistake in qualifying.

“It’s tough. You always say it until you’re the one that does something wrong, and then you’re like ‘I wish that rule wasn’t introduced’ because you just made a simple mistake. Or like when I spun in Imola, then I guess I’d say I wish there’s no rule.

“Obviously when someone else does it, you say you wish that was a rule. So it’ll always bite someone at some point. But of course people who are more vocal about it are the ones who just haven’t made a mistake just yet.”

Esteban Ocon believes stricter qualifying rules are needed for street races especially because of the greater chance of interfering with another driver’s lap.

“At the moment Monaco and [Baku] I’ve been suffering for that in qualifying. Probably people would take more care if they get penalised.

“It would be less easy to take a risk and just go down the escape road. So I would definitely be in favour of changing that for the street circuits.”

However Alonso believes introducing such a rule would bring practical challenges, such as determining whether a driver had committed a genuine mistake. He pointed to the example of Kevin Magnussen stopping his broken Haas at the side of the track during Sunday’s grand prix.

“It’s going to be always difficult,” said the Alpine driver. “It’s like in the race if you crash in one corner or if you park [I think] it was one Haas that parked in turn 15 if you park there or you park 10 metres after that, maybe you have a Safety Car deployment, depending on if you take a good position or not. And then we will penalise Haas driver because he chose the wrong thing? So we need to be careful on how we enter and how we do those things.”

However he does believe the rules for qualifying sessions need to be reconsidered. “Especially qualifying should be different,” he said. “We are dealing with problems of a slow laps, minimum time to respect traffic in the last corner, tows, no tows. I think we we should be clever and think [of] another format in qualifying.”