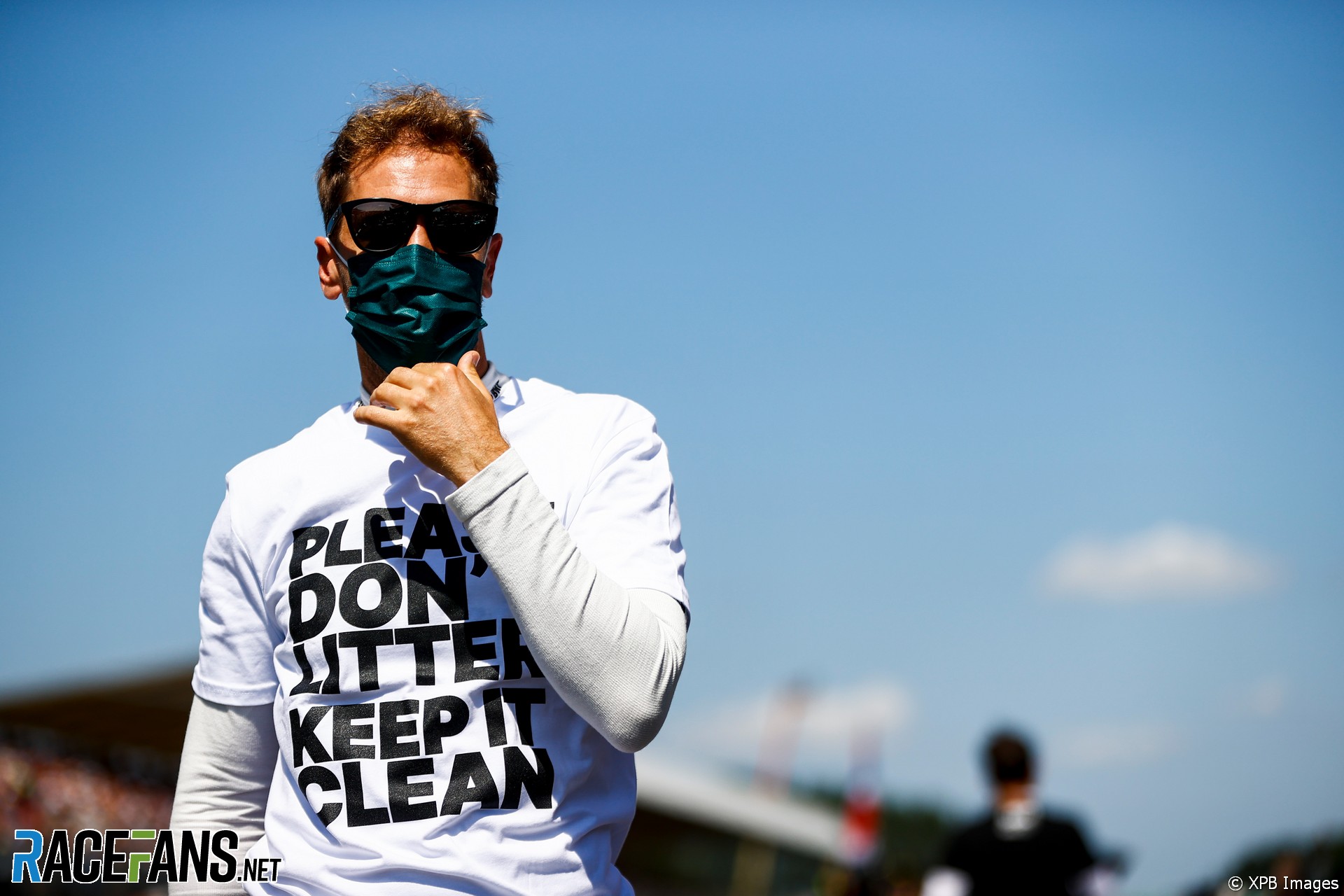 There are many modern innovations Sebastian Vettel is no fan of. He doesn’t really ‘do’ social media or the internet, preferring to keep his private life private, and was quick to question Formula 1’s move to hybrid power units.

Given the latter point, it’s been fascinating to observe the shift in his stance on social issues, including but certainly not limited to environmental advocacy. Rather than embracing hybrid or electric technologies, Vettel has a curiously analogue approach of his own. He has emerged as a straightforward activist for practical and immediate ways to improve the world around us.

It’s been a remarkable journey for a competitor who has driven the most advanced cars in any motorsport context for the last 15 years. Since making his F1 debut mid-season in 2007, Vettel has started 284 grands prix and won four back-to-back world titles.

At 34, he finds himself no longer at the sharp end of the series. But Vettel is still held in high regard by rivals and his own team, on and off-track.

When Vettel arrived in the sport as a fresh-faced challenger and during the years at Red Bull when he won his titles, he did not come across as someone with a huge number of environmental concerns. When the current V6 hybrid turbo power units were introduced in 2014 Vettel was foremost among their critics, questioning whether they were necessary and arguing they had spoiled the spectacle, even if he respected the innovation which had gone into them.

“I think the power unit, for us drivers, well, it is what it is,” he said at the 2015 Japanese Grand Prix. “I think we’re not probably at the same standings as the fans in terms of sound etc… Obviously it is a step back but in terms of the technology behind it, it is incredible. The question still remains open, whether we need it or not, that’s for everyone, individually, to decide, I guess.”

When Formula E was launched, Vettel was sceptical, more due to the lack of noise from the all-electric cars than technological or sporting views. Vettel’s stance was that F1 “needs to scream.”

His stance has changed little since. As recently as 2019 Vettel, furious with another power unit failure, snapped “bring back the fucking V12s” on his radio, a point he said he didn’t necessarily think was wrong, later and calmer.

“There’s no series like Formula 1 with V12s,” said Vettel, who entered F1 over a decade after the last 12-cylinder engine raced. “Otherwise, I would consider. These power units are very complex, from an engineering point of view, very fascinating. But I have my stand on it and I don’t think it comes with a great upside for us racing and people watching.”

But a fondness for V12s isn’t necessarily at odds with concerns for the wider environment – a point Vettel made in his appearance on UK politics show Question Time. Challenged over his participation in a “gas-guzzling” sport, Vettel admitted it made him feel hypocritical.

“You’re right when you laugh,” he told the audience as they chuckled at the question. “There’s questions I ask myself every day and I’m not a saint. Certain things are in my control and certain things are not. It’s my passion to drive a car, I love it and every time I step in the car I love it.

“When I get out of the car, of course I’m thinking as well ‘Is this something that we should do, travel the world, wasting resources?'”

It’s hard to imagine the Vettel of just a few years ago reflecting on Formula 1 in quite that way, or praising Extinction Rebellion as he did last year. After learning he would be dropped by Ferrari during 2020’s coronavirus pandemic lockdown, Vettel returned to the paddock more eager to espouse his views. Not only on environmental matters, but on social justice too, as he joined Lewis Hamilton and other kneeling during the pre-race anti-racism demonstrations.

Vettel has taken direct and pragmatic action to push his environmental message: Creating a bee habitat with school children in between races in Austria, cycling to race tracks rather than using a rental car, litter picking at Silverstone, creating a documentary about recycling (including a charmingly unglamorous visit to a plant in Slough) and promising to plant a million bee-friendly flowers in Germany to promote biodiversity. These are all examples of offline, low-technology interventions that make an immediate improvement.

It would be wrong to characterise Vettel’s approach to activism as being ‘better’ than Hamilton’s or anyone else’s for the fact he doesn’t use Instagram. Hamilton has got hands-on too, raising awareness of sea garbage (and getting in the water himself to retrieve it).

Other drivers, such as Formula E’s Lucas di Grassi, advocate their environmental concerns via the technology of racing. That’s justifiable and has broader practical applications, as do the environmental studies that green-missioned series Extreme E folds into its racing activities. Vettel’s approach, however, is a more direct one, with very few other parallels in the racing world.

An interesting point of comparison to Vettel is Formula E and GT driver Alexander Sims, whose projects include practical charging challenges, building a company that makes glasses frames from reclaimed sea plastic and (at one point) transforming his house into an eco-home. But his projects tend towards the technology-driven, while Vettel’s are specifically lo-fi, things that anyone can do, but which he chooses to give a platform to.

All of us can pick up litter, though few of us will make headlines for doing it. Vettel undoubtedly knows how to use his position as much as any other notable driver. His opportunities to advocate for environmentalism are born from his success in a sport which he clearly now feels conflicted about. However his direct approach to meaningful results, from clearing trash to creating habitats, shows he has the same results-orientated approach off the track as he does on it.