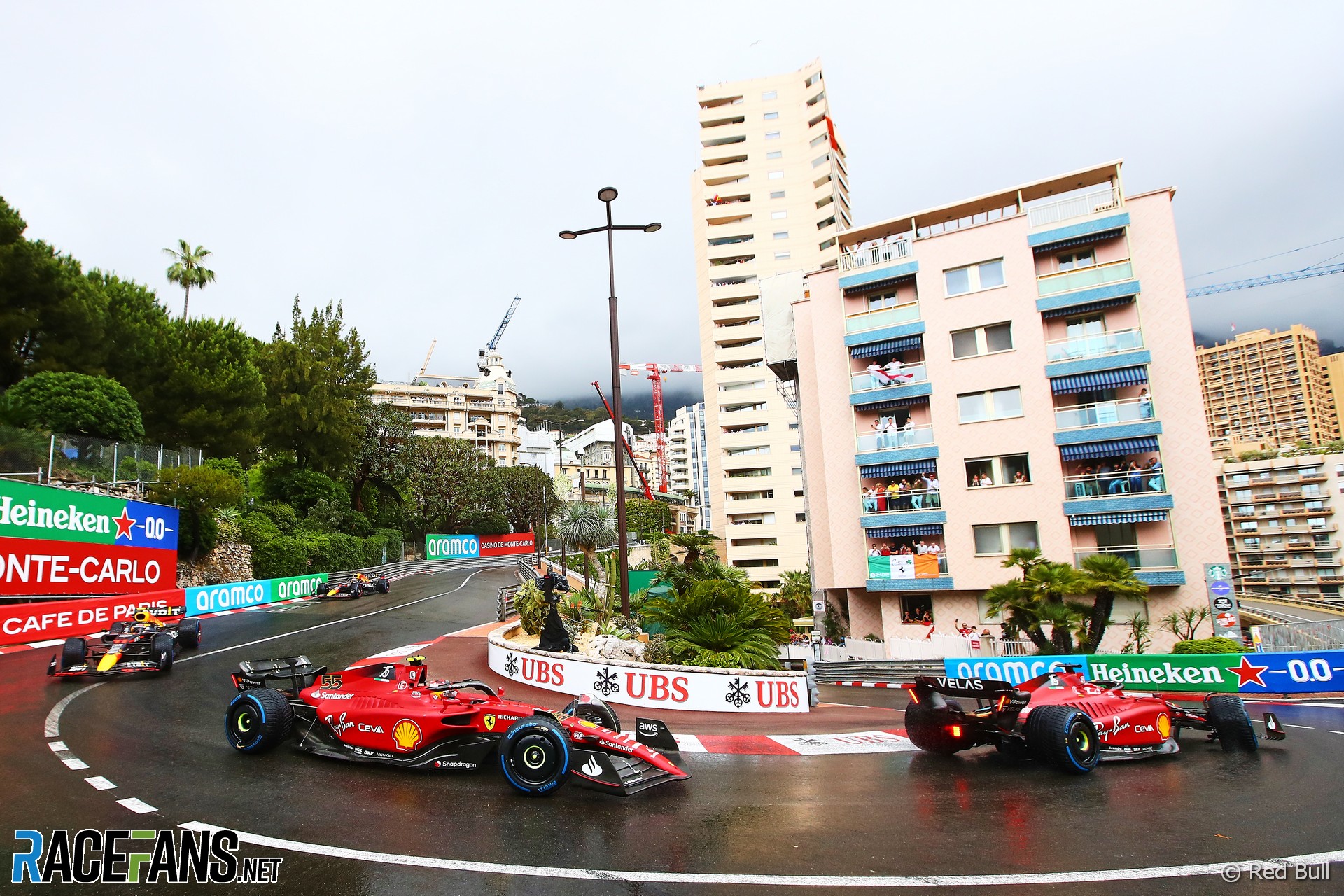 Red Bull’s Monaco Grand Prix win was a strategic triumph over rivals Ferrari on a day when either team could have won the race.

Ferrari held a strong hand at the start. Charles Leclerc and Carlos Sainz Jnr locked out the front row of the grid, banishing the Red Bull pair to row two.

A pre-race downpour meant proceedings began with a rolling start, depriving the Red Bull drivers of an opportunity to split the Ferraris. But it also increased the opportunity for them to capture the lead via strategy.

The whole field had to start the race on the full wet weather tyres. With no further rain falling and the track drying out quickly on a warm afternoon, it was clear drivers would eventually end up on slick tyres.

Whoever found the quickest route slicks stood a great chance of taking the lead. The teams faced two routes: A conventional transition to intermediates and then slicks, or jumping straight from the ‘extreme’ full wets to dry-weather rubber, as Lewis Hamilton used to win the race in similar conditions six years earlier.

After the Safety Car peeled into the pits Leclerc led the field away. Behind him Sainz was pursued by the Red Bull pair, all four hunting for grip on the treacherous surface:

As the conditions improved Leclerc picked up his pace at the front and began to put some distance between himself and team mate Sainz. Perez, running third, told his team he was losing time behind the second Ferrari.

“Charles in the early laps seemed to have things pretty much under control,” said Red Bull team principal Christian Horner. “He’d got the buffer of his team mate behind him as well. At that point in time it looked like Ferrari had the race in the bag.”

Max Verstappen’s radio chatter was strikingly different to his rivals, particularly the Ferraris, in that there was far less communication going on. For an eight-minute stretch, while the Ferrari drivers were getting constant updates on lap times and tyre temperatures, Verstappen circulated without a word between him and race engineer Gianpiero Lambiase.

Meanwhile Sainz, running in second place, had become convinced that switched directly to slicks, skipping the intermediates, was the best way to go, and made his preference clear to his team:

Red Bull made their move on lap 15, bringing Perez in. This was likely provoked by Lewis Hamilton’s pit stop the lap before, which left a gap for fifth-placed Lando Norris to drop into. Once Norris pitted, a gap for Perez would appear.

As it happened, McLaren didn’t bring Norris in, and Perez emerged behind him. Fortunately for Perez it took him a lap to catch the McLaren, at which point Norris peeled into the pits, and Perez was able to press on with clear air ahead of him. Others would not be so fortunate.

Strikingly, while Ferrari debated their tyre preferences, at Red Bull the drivers were simply told to pit when the best strategic option became clear to the team.

“You’ve got to have effective and clear communication,” said Horner. “I think as a pit wall we worked, we had all the information, we were using the information well to get that crossover right.

“We were debating whether you go straight from the extreme onto the slick, as we saw with Lewis when it hurt us a few years ago with Daniel [Ricciardo]. But we decided it was a quicker route to go through the inter onto the slick. The power of the out-lap was enormous and I think Checo absolutely nailed it.”

Having seen Perez pit, Ferrari felt the need to respond. Sainz was called in first but he expressed doubt, reasserting his preference to wait for the crossover point to slicks.

Leclerc was less emphatic about his tyre preference. Having been advised of Perez’s move he told the team “inter would be much quicker, for sure.” He was called in soon afterwards and put on a set of intermediates.

This was the point Leclerc’s race started to go wrong. Perez gained so much time in the two laps between his pit stop and Leclerc’s that he jumped ahead of the former race leader. Had Ferrari seen that coming, they would surely have left Leclerc out and waited to put him on slicks.

Red Bull brought Verstappen in on the same lap as Leclerc. On his second lap out of the pits the world champion gained over three seconds on Leclerc, who caught the lapped Alexander Albon. The Williams driver reasoned that letting Leclerc past would cost both of them more time than him staying ahead, and didn’t give the place up until he skidded off the track at Sainte Devote.

Sainz had taken the lead of the race on his full wet weather tyres but was being caught quickly by the intermediate-shod trio of Perez, Leclerc and Verstappen. However other drivers had already switched to slicks and Ferrari had taken note of their lap times.

They brought Sainz in for a set of slicks, making him the only one of the leading quartet to skip the intermediates. It was a well-timed stop from the lead, and it should have put him on course to win the race.

But infuriatingly for Ferrari their other driver now lost time behind the other lapped Williams, which belonged to Nicholas Latifi. Sainz was less agitated on the radio than Leclerc was about Albon, but the loss of time as well as heat in his slick tyres cost him badly.

Leclerc had a new reason to get upset. Ferrari called him in for his switch to slicks on the same lap, which would have been a well-timed move, except that he followed his team mate in and lost around three seconds waiting for the crew to switch between cars. He exploded with fury.

Now Red Bull demonstrated to Ferrari how to perform ‘stacked’ consecutive pit stops for both drivers on the same lap. Verstappen followed Perez in, but lost around a second less than Leclerc, and jumped ahead of him. That completed the Ferrari driver’s misery. Having led the race, he’d fallen to last out of the leading quartet.

Meanwhile Sainz’s delay behind Latifi played into Perez’s hands. His race engineer Hugh Bird advised him he would be racing for the lead when he rejoined the track, and he duly took it.

It was a bitter run of a mistakes and misfortunes for Ferrari, who had lost one or more positions for their cars with every pit stop they made.

“We had to go out and win it but we also capitalised on the mistakes that were made,” said Horner. “I think we just reacted very well to the to the conditions and got the crossovers right, the double pit stop, et cetera, et cetera. It worked very well for us.”

Red Bull came close to inflicting total humiliation on Ferrari, as Verstappen was not far off jumping ahead of Sainz for second place. Nonetheless Perez had successfully taken positions from both Ferrari drivers, and was on his way to victory.

Horner said Red Bull’s result vindicated their attacking approach to the race. “I’ve always prided ourselves on us being an attacking race team,” he said. “We’ve always focussed on trying to do the basics well, whether that’s strategy, whether it’s pit stops, thinking on your feet.

“This was all about thinking on your feet and reacting to the situation as it happens around you. And I think that the whole team responded brilliantly well and the drivers, of course, had to deliver their part.”

30 comments on “Transcript: How Red Bull seized a win that ‘Ferrari looked like they had in the bag’”