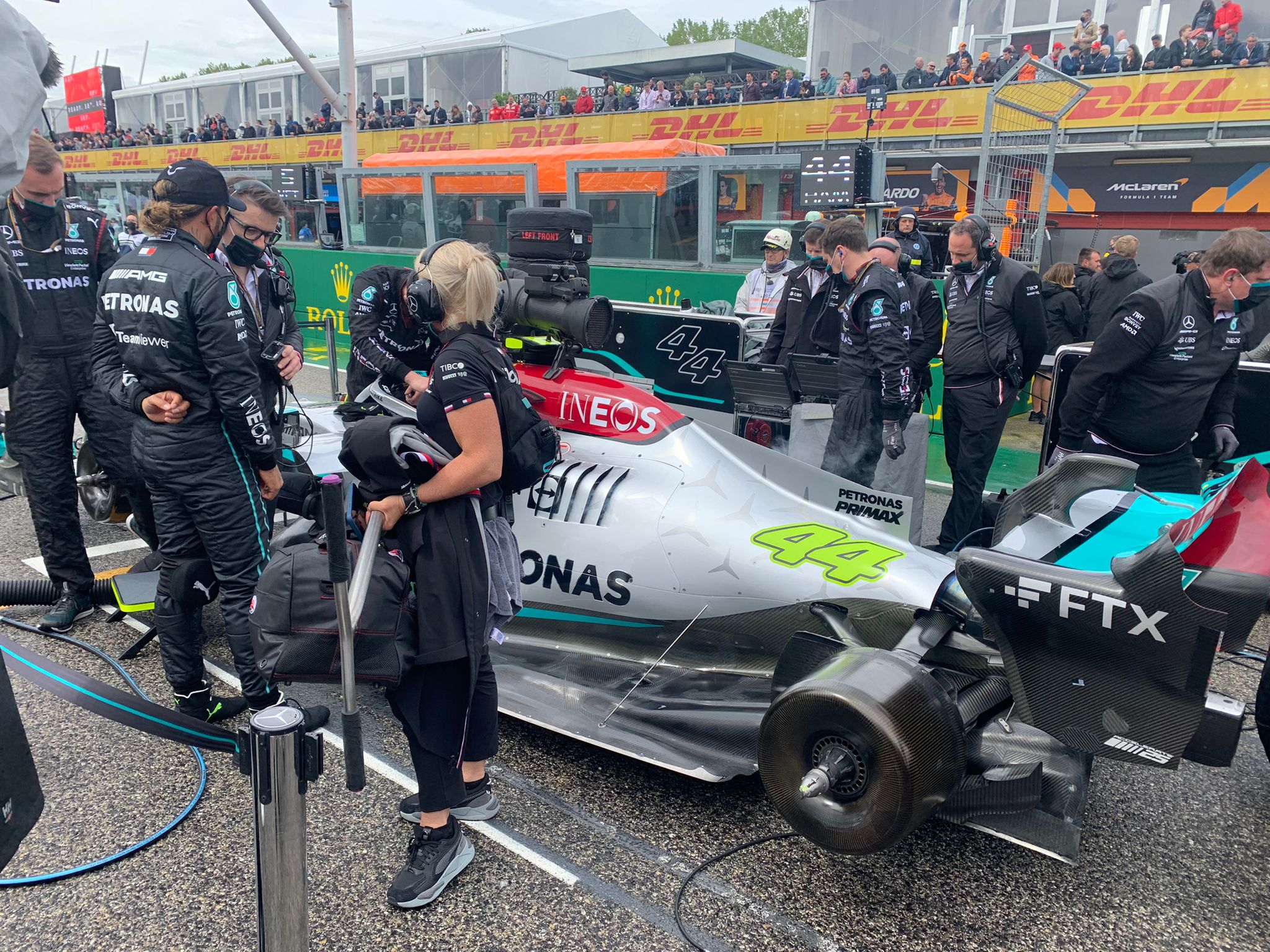 The first sprint race weekend of the 2022 season was also the first where the intermediate and wet tyres were called into action.

But as Formula 1 returned to Imola for the third consecutive year, RaceFans’ paddock reporter Claire Cottingham got her first taste of the northern Italian circuit. It would prove a weekend of exuberant crowds, car park quagmires and some interesting insights into the drivers and teams…

After skipping the Australian Grand Prix, I was keen to get back in to the paddock, particularly after the unpleasant events of the Saudi Arabian Grand Prix. Where better than Imola, a circuit I had never visited before?

The venue has been back on F1 calendar since 2020, when the world was still trying to regain control as Covid-19 swept through country after country with devastating impacts, and F1 suddenly needed to replace far-flung events with ones closer to home. Thankfully, the fans were back this weekend, and there are few finer spectacles in motorsport than the Italian grandstands when Ferrari are back on top. With Charles Leclerc leading the standings heading into the weekend, that was very much the case.

Having flown in late on Wednesday evening, I arrived at the track on Thursday to take advantage of any media opportunities. Not only were Ferrari, Haas and Aston Martin making their drivers available, but RaceFans had secured an exclusive chat with Pierre Gasly.

Grinning cheerily, dressed from head to toe in AlphaTauri’s fashion line, Pierre ordered a cappuccino before joking to his Italian press officer Fabiana Valenti that he knew he’d be chucked out of the country for daring to have a cappuccino any time after noon.

Pierre spoke openly and candidly about his time at Red Bull’s senior team, which lasted just half a season before he was sent back to their junior squad. We briefly touched on his relationship with his friend Anthoine Hubert, who died in 2019 during a Formula 2 race at Spa.

Pierre said a warm goodbye as I left to interview the Haas drivers. As I left the track, heavy rain began to fall, which would have a crucial bearing on the next day. Our interview will be published in full later this week.

A deluge of overnight rain made the drive into the circuit hairy to say the least. Arriving at the track ready for first practice, the media car park was already a mud pit. I realised this could pose a problem later on, but decided that was an issue for Future Claire to deal with.

I proceeded into the circuit for the first session of the sprint weekend format after a lengthy press conference in the morning. Many drivers addressed the new weekend schedule implemented by the FIA since the start of the season, which has seen Thursday’s media day shifted and compacted into smaller time slot on Friday morning.

Not to put too fine a point on it, many of them aren’t fans. Max Verstappen was particularly vocal, pointing out that drivers spend a lot of time repeatedly answering the same questions for the benefit of television cameras, and suggesting F1 should adopt the example of other sports which group broadcast press conferences together.

Having never visited Imola, I wasn’t aware of the treat I was in for as the press room overlooks the start-finish straight with a balcony sitting above the pits. Watching the cars thunder past me even made me forget about the rain, and my excitement was brewing for our first sprint race of the season with that evening’s qualifying session producing five red flags.

The rain finally stopped, however the car park was a quagmire. Driving a Fiat Panda, I had no chance of making it out, but never the one to be defeated I attempted my great escape. I made it around two yards before I became stuck in the mud. Despite the best efforts of the kind Ferrari crew who tried to push the car out, I was eventually towed out by a tractor, chuckling to myself at the ridiculousness of the situation.

Basking in the sunshine that greeted us on Saturday, I opted to go trackside for second practice, walking through the hoards of Ferrari fans ready to cheer on Charles Leclerc and Carlos Sainz Jnr.

I paused briefly to look at the Ayrton Senna flags hung up on the fence close to the site of his tragic accident, and a statue in homage to the great driver. I made my way to the Variante Tamburello, before walking towards Variante Villeneuve before settling at Curva Tosa. Cheers continued for Ferrari, as the practice session got underway ahead of the race.

The sun continued to shine after lunch, and I got my first taste of an F1 grid in 2022, a moment I always cherish. The crowd roared as the two Ferraris arrived onto the track, and the red flares began to fill the air. Relatively quieter than usual, I was able to look at the cars up close on my first grid outing of the season.

After the race, interviews got underway again with the wet weather holding off, however after dinner I was met with a monsoon of rain as I headed back to my hotel, sodden once again.

I awoke in a panic thinking I had missed the race – it was in fact 8:30am. The traffic was clear on the way in, though the car park still remained a mud skating rink.

Sunday at grand prix weekends are a mix of investigating and socialising to try and collect the final titbits of information ahead of the race. I arrived at the circuit with a tray of Italian biscuits that had been left in my hotel room by the staff. Perplexed but touched at what I would do with a huge tray of biscuits, I knew they’d be appreciated in the press room.

The grid ahead of the race was packed. I stationed myself first at Mercedes. Lewis Hamilton stayed on the grid longer than usual. He usually hops out of the car and is gone in a flash. This time he stopped and talked to engineers before making his exit.

Charles Leclerc, however, basked in the crowd’s energy, waving frantically at the Tifosi who cheered adoringly back. But the race didn’t quite work out for Ferrari, with Red Bull remaining firmly on top at the chequered flag.

The post-race interviews began before the race was even over, with a luckless but resolute Fernando Alonso. The day ended in conversation with a much happier Christian Horner, who was glowing in the glory of a near-perfect result in his top rivals’ backyard.

With that, the weekend was over, with only one pizza consumed, but a severe lack of Aperol Spritz.

Become an RaceFans Supporter today and browse the site ad-free. Sign up or find out more via the links below: