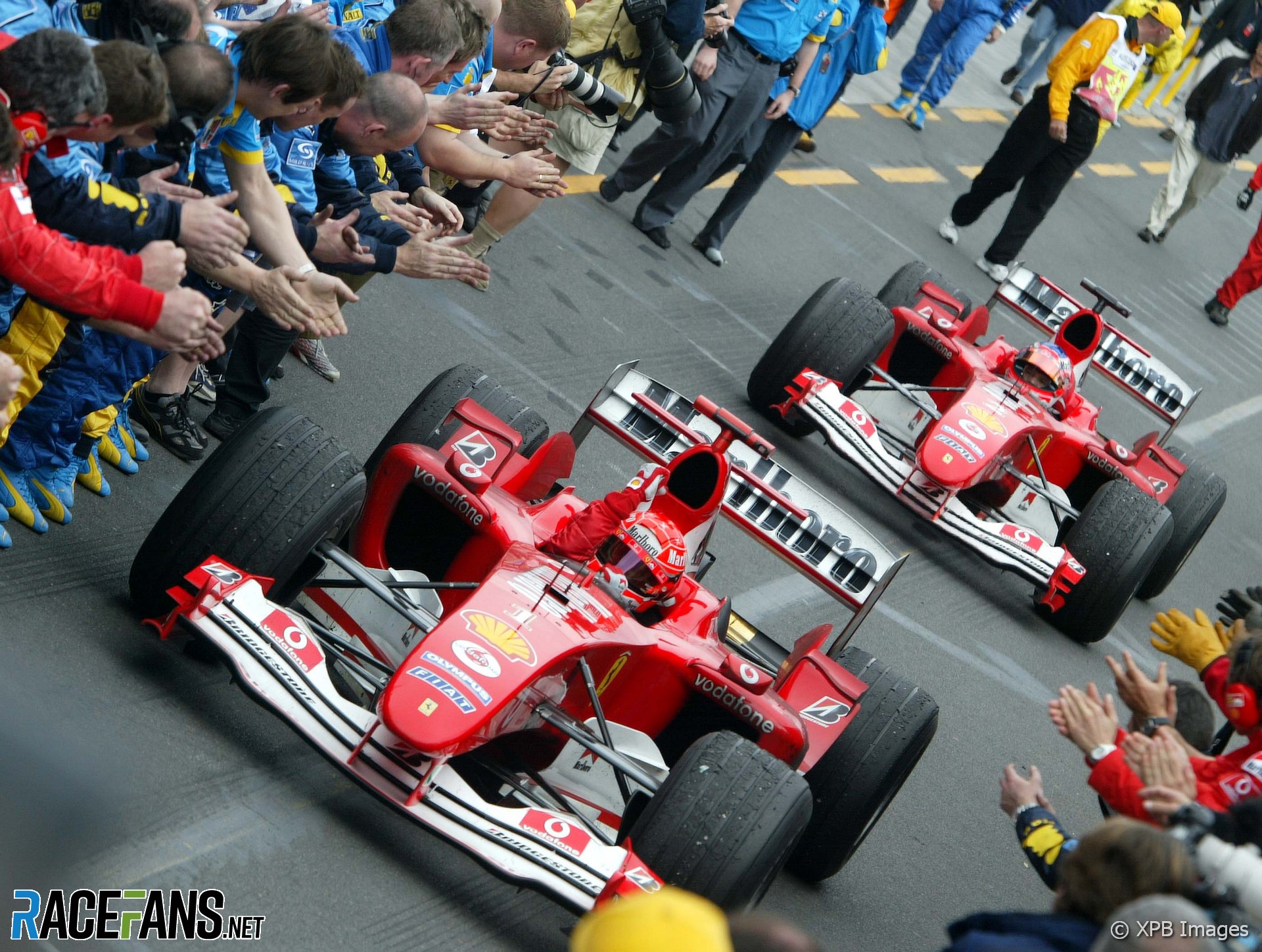 With their second win from the first three races of the year, Ferrari have made their best start to a season since their dominant 2004 campaign.

Charles Leclerc and Carlos Sainz Jnr have racked up 104 points between them. That’s the most the team has scored since the current ’25 points for a win’ system was introduced in 2010.

In 2017 Sebastian Vettel and Kimi Raikkonen scored 102 points over the opening trio of races. They also took one fastest lap during that time, which wasn’t worth a point that year, and would have put them on 103, still one less than they have today.

Looking back over past seasons and adjusting for the change in points system, Ferrari are off to a stronger start than they made in their most recent championship-winning campaigns in 2007 and 2008.

Not since their crushing 2004 season did they start a season so well. Michael Schumacher won all of the opening three rounds, while Rubens Barrichello took a pair of seconds and a fourth. Adding two more points for a pair of fastest laps would have put them on 125 today, instead of the 51 they actually had.

Comparing current points scores to past seasons will become trickier from the next round, as it is the first sprint event of the year, and teams could bag an extra 15 points each. That will be at the first of two home races for Ferrari this year, at Imola.

In a neat symmetry, Leclerc scored a ‘grand slam’ in Melbourne last weekend – taking pole position, leading every lap and setting fastest lap – just as Schumacher did when he kicked off Ferrari’s 2004 campaign at the same venue. Schumacher took his fifth and final grand slam later that year in Hungary, while this was Leclerc’s first.

He is the 26th different driver in F1 history to achieve a grand slam. Out of the 1,060 world championship races held so far, 64 (6%) have witnessed such feats of dominance.

But he said he is “not really” excited by such details. “At the end what matters is that I crossed the finish line first at the end.

“Obviously it’s always nicer and it shows how good of a job we’ve done until now, especially this weekend, with a statistic like this. But it doesn’t matter to me that much.”

Leclerc may be more interested to learn he’s made the best start to a season for any driver since Nico Rosberg in 2016, both in terms of point scored (71) and the margin over his closest championship rival (34, to George Russell, the latest occupant of what was once Rosberg’s seat).

This was the fourth win of Leclerc’s career which puts him level with Eddie Irvine, who also scored all of his victories for Ferrari, plus Bruce McLaren and Dan Gurney. He took his seventh fastest lap, match Jacques Laffite’s career tally.

But it was a miserable weekend for Leclerc’s team mate Carlos Sainz Jnr who showed promising pace but suffered technical problems in qualifying and the race and later spun into retirement. He failed to score for the first time in 18 races, ending the longest points-scoring streak of his career.

Two retirements from the first three races means Verstappen’s title defence has got off to a conspicuously poor start, certainly by modern standards, notwithstanding his Jeddah win. He lies sixth in the standings, which is far better than some champions managed in the seasons after they took the crown. The worst of which was Jody Scheckter, who quit the sport after sinking to 19th in 1980, the year after he won the title.

Alexander Albon picked up his first point as a Williams driver with a fine run to 10th. That capped a miserable weekend for Aston Martin, who failed to score again, and are now the only team still on zero.

Spotted any more noteworthy stats and facts from the Australian Grand Prix? Share them in the comments!

RaceFans is run thanks in part to the generous support of its readers. By contributing £1 per month or £12 per year (or the sme in whichever currency you use) you can help cover the costs of creating, hosting and developing RaceFans today and in the future.

Become an RaceFans Supporter today and browse the site ad-free. Sign up or find out more via the links below: