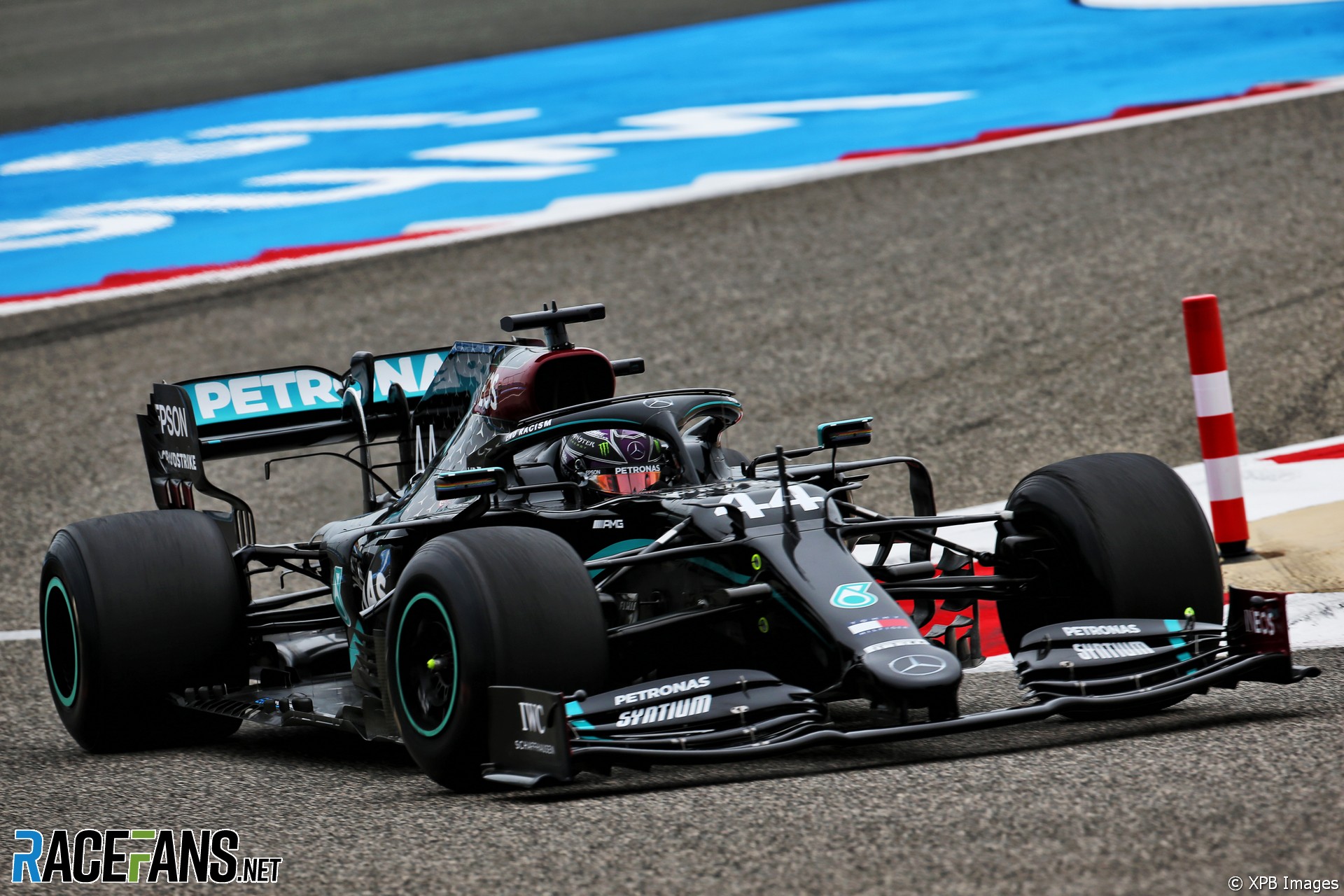 Lewis Hamilton set the fastest lap in the first Friday practice at Sakhir, after consistently topping the times all session.

Valtteri Bottas finished the session second and nearly half a second behind his team mate. Both chose to run two stints on the 2021-specification Pirelli C3 tyres that have been provided, although it wasn’t obligatory to run more than six laps during the session. The Mercedes cars ran an unusually high number of laps by their standards in practice, both clocking in over 40 in total, with final long runs on the 2021 test tyres.

Sergio Perez had a strong session, finishing third fastest having done 13 laps on the quickly-degrading soft tyres, more than any other driver. Carlos Sainz Jnr and Pierre Gasly were just behind him, ahead of both Red Bull cars, whose drivers were once again struggling for stability.

Max Verstappen was one of three drivers who had spins while running the soft tyre compound, which seemed very subject to Bahrain’s abrasive surface. Romain Grosjean had the most dramatic off, only narrowly keeping his Haas out of the wall at turn six. He was able to make it back to the pits on ruined tyres after his trip through the gravel. Leclerc and Verstappen both had less dramatic 360 degree spins at turns two and 14 respectively.

Both Renaults and the second Racing Point of Lance Stroll completed the top 10. The Ferrari pair were next, lapping within a tenth of a second of each other, followed by a quartet of similarly-engined cars.

Robert Kubica, who stepped in for another first practice run at Alfa Romeo, finished the session 13th, almost two tenths ahead of Giovinazzi. The pair were separated by the two Haas drivers. Grosjean complained about rear stability prior to his spin, although he finished ahead of team mate Kevin Magnussen.

Antonio Giovinazzi, Daniil Kvyat and Lando Norris all seemed not to get the chance for a representative time. Giovinazzi and Kvyat almost two seconds off the fastest pace and Norris languishing 2.359 seconds back, ahead of only the Williams cars. Roy Nissany took over George Russell’s car for the session, ending up last, but within four-tenths of a second of regular driver Nicholas Latifi.

Rear-end stability and front tyre degradation was a common complaint throughout the field. The 26C air temperature was much cooler than usual for F1’s visit to Bahrain. Leclerc said “even one lap” was enough to cause graining. Bottas also had several lock-ups during session, severely scuffing his front left on an early soft tyre run and then experiencing the same on his first Pirelli test stint.

A total of 17 lap times were deleted because drivers ran wide at turn four. Daniil Kvyat, one of several victims, urged race director Michael Masi on the radio to change how the corner was being policed.

Drivers more then ten seconds off the pace omitted.