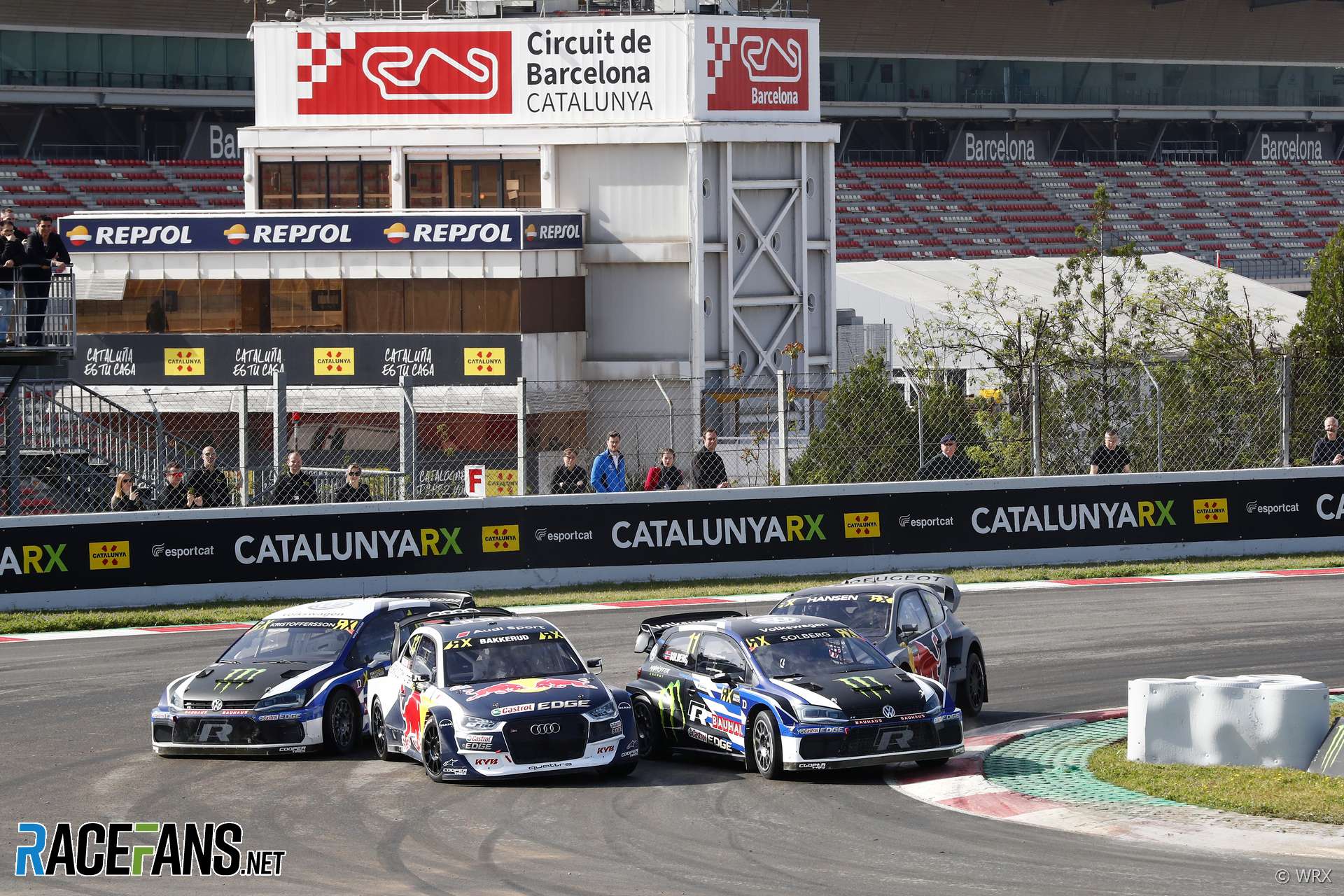 Controversy hit the World Rallycross Championship in its first race of the season in Spain as former champion Mattias Ekstrom was penalised for a driving infringement.

Defending champion Johan Kristoffersson who took victory in the first round of the World Rallycross Championship in Barcelona after Mattias Ekstrom was felt the wrath of the stewards.

Having fought through from fifth to reach the final with victory in semi-final two, Ekstrom lined up alongside Petter Solberg for the start of the final. Off the start, Ekstrom squeezed the former WRC and WRX champion, forcing him into the tyre wall and out of contention.

Kristoffersson slotted into second, with Andreas Bakkerud third, Sebastien Loeb fourth and Niclas Gronholm fifth. Loeb was the first to joker, and when everyone else followed suit, it was Ekstrom who came out in the lead ahead of Kristoffersson, Loeb, Bakkerud and Gronholm, who took an impressive fifth in the debut for the Hyundai i20 RX.

Ekstrom’s disqualification from the final moved Solberg up to fifth in the result, with Ekstrom still receiving the points from the qualifiers and the semi-final.

Felipe Drugovich leads the Euroformula Open championship after the opening round of the season, having picked up in the first race where he left off in the final race of 2017. Drugovich took pole position on Saturday morning, kept his rivals at bay as the lights went out, and controlled the race to win by seven seconds from compatriot Matheus Iorio and Cameron Das.

Petru Florescu had a scrappy opening race with several mistakes that eventually led to a retirement, but turned it around on Sunday with pole position for race two, albeit by one thousandth of a second. His race craft once again left much to be desired however, as a small error on lap six handed the lead to Marcos Siebert, whom he’d marginally denied pole position. Florescu began to freefall and eventually finished just fifth, while Siebert won from Drugovich and Bent Viscaal.

Max Fewtrell took pole position for both races in the opening round of the Eurocup, and came away with a win and a second place to lead the standings. He lost victory in race one to R-ace GP team mate Logan Sargeant, who passed him off the line. Victor Martins initially failed to move from his third place grid slot, condemning him to finish outside the points. That promoted Yifei Ye to take the final podium spot.

Fewtrell made a much better job of the getaway in race two as he held his lead into turn one, and went on to claim the victory ahead of Ye Lundgaard. Sargeant’s hopes of taking a second win ended when his car failed while running third behind the Safety Car, handing third place to rookie Christian Lundgaard.

The third round of the IMSA series was dominated by strategy, with the Action Express Cadillac taking the victory at the hands of Filipe Albuquerque and Joao Barbosa. The Penske Acura of Juan Pablo Montoya led initially from pole, but was chased hard by Felipe Nasr in the Whelen Cadillac before the Brazilian took the lead into turn nine.

Nasr and Montoya were the only prototypes not to pit, with the #55 Mazda of Jonathan Bomarito taking third as the first of the cars to have made a stop. Nasr pitted with 45 minutes to go, handing over to Eric Curran, and the Penske pitted minutes later, handing the lead to Albuquerque. With 25 minutes to go, debris on the pit straight brought out the full course caution to close up the field, and from the restart, Ryan Dalziel muscled his way past Ricky Taylor’s Acura, before Taylor ran wide in turn one, allowing the Wayne Taylor Racing Cadillac into third place. In GTLM, Oliver Gavin and Tommy Milner won the class for Chevrolet, but only by two seconds from the Ford pairing of Ryan Briscoe and Richard Westbrook.

Video not available yet

The eighth round of the NASCAR Cup season at Britaol was interrupted by rain and is scheduled to resume later today.

Daniel Ricciardo won the Chinese Grand Prix after a great strategy call from Red Bull while under safety car conditions, and some exceptional overtakes in the final twenty laps. Valtteri Bottas and Kimi Raikkonen completed the podium while Max Verstappen ran into Sebastian Vettel, relegating the Championship leader to an eighth place finish.

Sam Bird won the first ePrix on the streets of Rome to slash Jean-Eric Vergne’s championship lead to just eighteen points. Felix Rosenqvist had led from pole until his suspension failed having hit one too many kerbs, leaving Lucas di Grassi and Andre Lotterer to complete the podium with Vergne continuing his impressive run of having not finish outside the top five in fifth place.