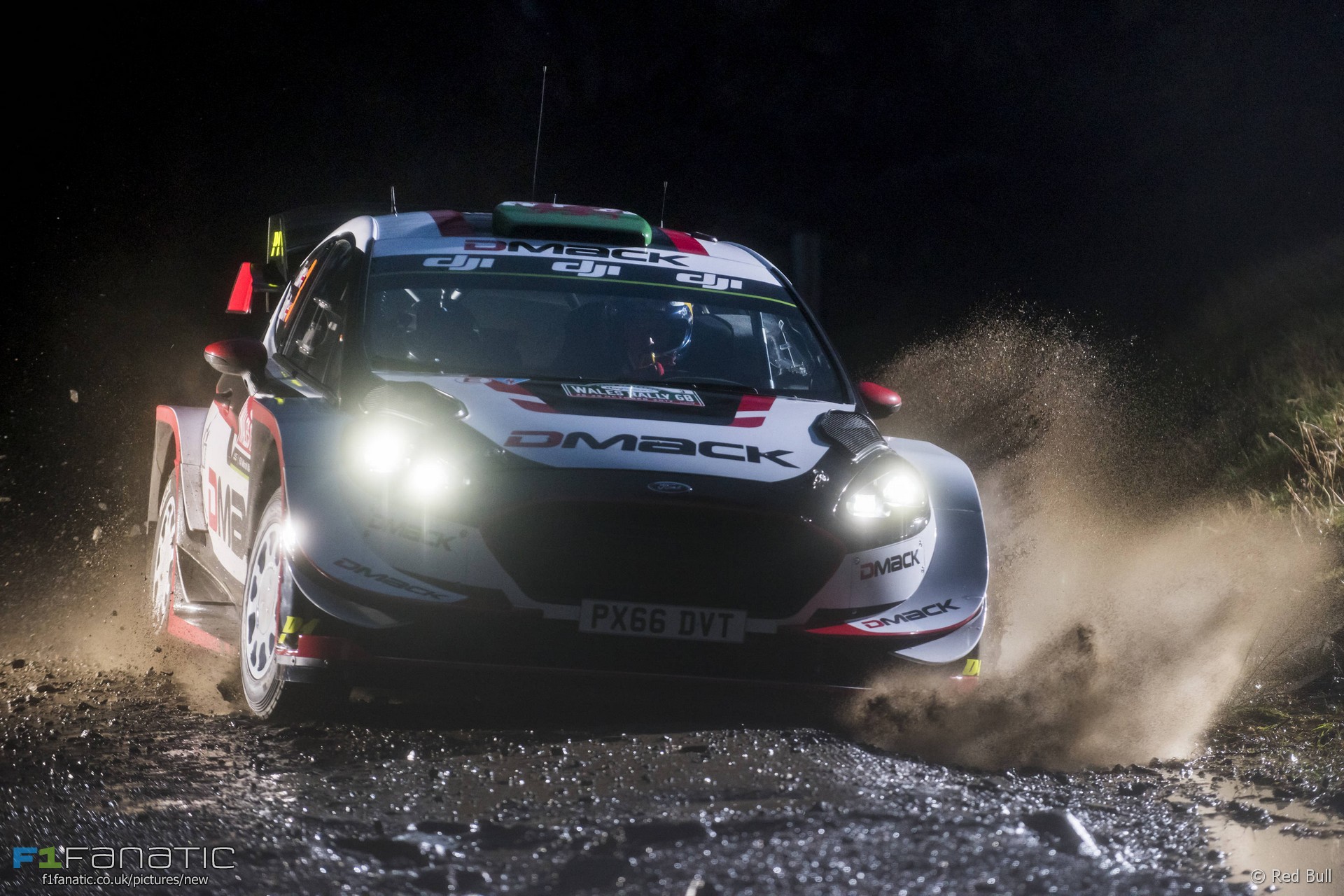 The only independent team in the World Rally Championship wrapped up an impressive season at the penultimate round in their home country by sealing both drivers and manufacturers titles.

Also last weekend the Formula Renault 2.0 Eurocup championship was decided after a huge crash and the Euroformula Open series also ended at the Circuit de Catalunya. NASCAR’s round of eight started and the biggest story from the World Touring Car paddock in Japan was about the previous round in China.

Sebastien Ogier clinched his fifth successive world title with a round to spare at Wales Rally GB, giving independent team M-Sport their first ever drivers’ title, on the same weekend they clinched their maiden manufacturers’ championship. They’ve now won five from twelve rounds against the might of manufacturer outfits Hyundai, Citroen and returnees Toyota.

They’ve also produced two first-time including, last weekend, Elfyn Evans. Having come painfully close to winning earlier this season in Argentina Evans made the most of his DMACK tyre advantage to claim a comfortable victory ahead of Thierry Neuville.

Second place for Neuville proved insufficient to keep him in the title fight. Ogier completed the podium but still needed a minimum of one point from the power stage. He took two, but was only a tenth of a second clear of not taking any.

Evans led the event from the second stage and won by over half a minute in a rally that saw barely any mistakes and an incredibly close five car fight on the final day for second place, which had been brought about as a result of heavy fog in Saturday nights stages.

Sacha Fenestraz clinched the championship in the second race of the weekend. However the Sunday morning race had to be red-flagged after a first-corner pile-up eliminated a dozen drivers from the 32-car field.

Second row occupants Max Defourney and Gabriel Aubry made contact, leaving Defourney facing the oncoming pack of cars, many of which piled into him. The most incredible near-miss involved Frank Bird, who flew into the air following contact with Luis Leeds, and landed on several other cars.

Once the mess was cleared away new Ferrari junior driver Robert Shwarzman led the field to his second straight win from pole. His race pace promised to make race three a thrilling encounter, but despite pushing pole sitter Fenestraz hard the new champion ended the season on a high with his seventh win.

Red Bull junior driver Richard Verschoor was the top rookie in all three races but that wasn’t enough to stop Max Fewtrell ending the season first among this year’s large contingent of newcomers.

The big news as teams arrived in Japan was that all Honda cars had been disqualified from both races in China due to non-compliant fuel injectors. This affected Norbert Michelisz the most, dropping him to 32.5 points behind championship leader Thed Bjork.

Tiago Monteiro’s championship chances slipped away further in Japan after he was forced to miss another round following his testing crash. Michelisz took over as Honda’s lead contender after winning the main race which, for the second race weekend in a row, was cut short by poor weather.

Tom Chilton won the opening race after jumping into the lead from the outside of the front row at the start in wet conditions while his rivals behind ran into each other. After being excluded from both races in China, Michelisz needed a strong race to reignite Honda’s championship hopes but a misjudged overtake by Nestor Girolami saw him drop out of the top ten, only recovering to seventh while Yann Ehrlacher and Monteiro’s stand-in Esteban Guerrieri completing the podium ahead of fourth placed Bjork.

Fortunes changed for Michelisz in the second race as a safety car start saw him keep the lead before only having to defend it for four racing laps before the safety car reappeared and the race was red-flagged once it hit 75% distance and full points could be awarded. Nicky Catsburg and Girolami completed the podium while Bjork made one of very few overtakes to finish fifth, giving him a 16.5-point advantage over Michelisz.

Harrison Scott had already wrapped up the title and skipped the final round. That gave the chance for others to shine and the first to do so was championship newcomer Felipe Drugovich, who put his car on pole for race one.

His six laps into the race the RP Motorsport driver went off, handing the lead to Devlin DeFrancesco. The Carlin racer led team mate Ameya Vaidyanathan to the flag, followed by Alex Karkosik. Fourth went to Nikita Troitskiy ahead of Lorenzo Colombo, while Drugovich fought his way back up to sixth.

Drugovich made amends in race two. Vaidyanathan started from pole but the Brazilian moved ahead to win, though being a guest driver meant he did not score championship points. Troitskiy finished in second and with it took rookie honours, while Vaidyanathan claimed third. Joey Mawson – the third of the debutant drivers for the weekend alongside Drugovich and Colombo – took fourth to make up for a race one retirement.

Scott’s dominance was such that despite his absence he won the title by 118 points and only failed to win two of the 14 races he participated in. Troitskiy’s rookie season saw him take second and the rookie title, while Devlin DeFrancesco was third, and winner of the Spanish F3 sub-championship.

Kyle Busch led 184 of 500 laps around the short track at Martinsville and held off Martin Truex Jnr by a tenth of a second as chaos erupted behind them at the finish.

Lewis Hamilton wrapped up his fourth world title despite an opening lap collision with rival Sebastian Vettel that resigned him to a ninth place finish. Vettel also picked up damage and was forced to pit, but his recovery drive to fourth wasn’t enough to prolong the battle. Meanwhile Max Verstappen took a fairly dominant win up front ahead of Valtteri Bottas and Kimi Raikkonen.

Andrea Dovizioso won in Malaysia to ensure the MotoGP championship will go to the final race after Marc Marquez could only manage fourth place. Johann Zarco led initially as the championship contenders nearly collided behind him but the Ducati’s quickly picked up pace with Jorge Lorenzo moving into the lead from Dovizioso. It was widely expected Lorenzo would move aside for his title contending team mate but the decision was taken out of his hands when a small slip at the final corner allowed Dovizioso through and to the win anyway, with Zarco completing the podium.

4 comments on “Independents triumph in WRC, huge pile-up in Eurocup”