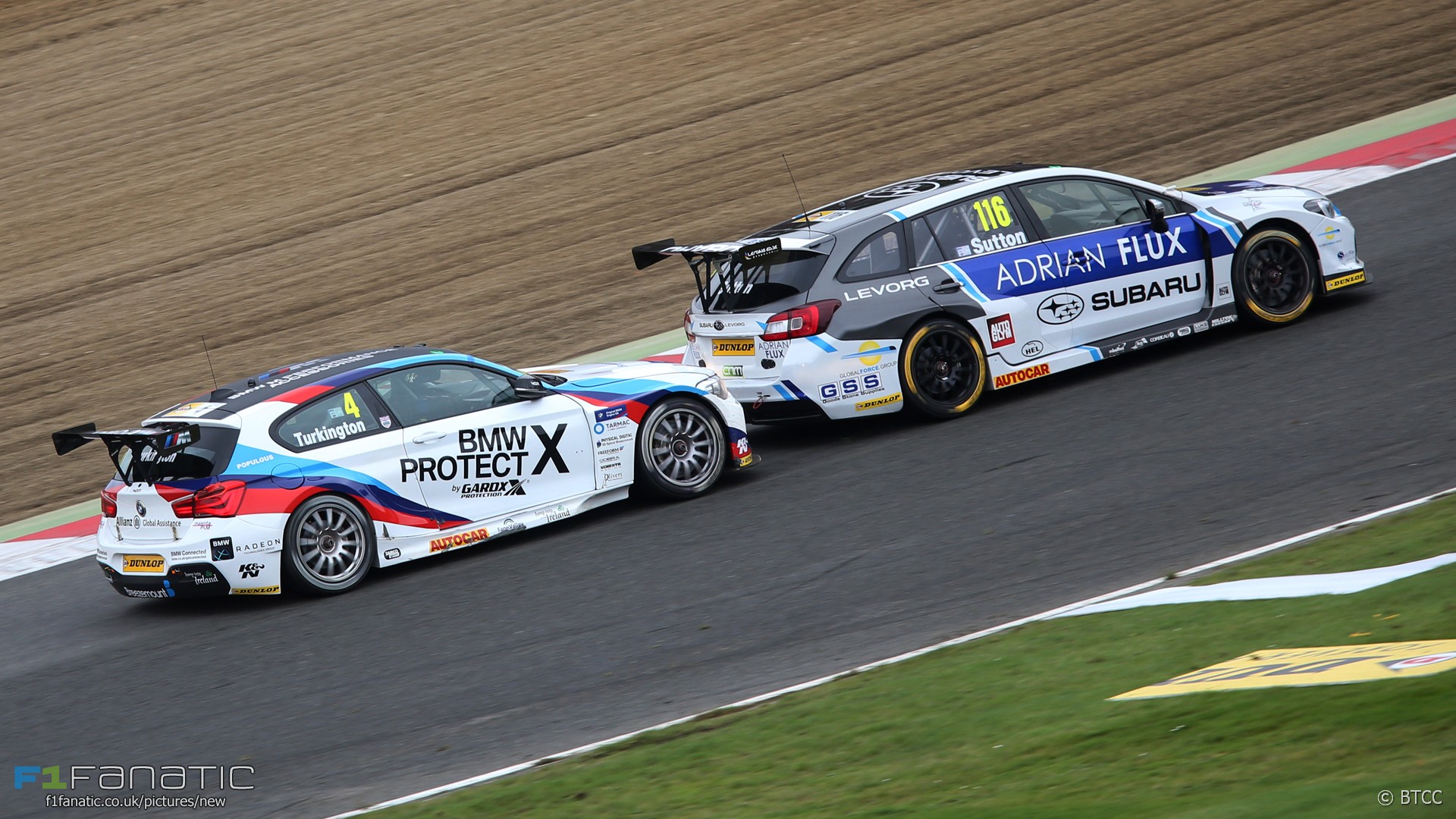 The 2017 British Touring Car Championship was decided in the final of three dramatic races at Brands Hatch last weekend.

Elsewhere the Euroformula Open championship was wrapped up with two rounds to go and the battle for the NASCAR title progressed to the next stage.

The fortunes of title contenders Ash Sutton and Colin Turkington swung dramatically over the course of the final three races of the year on Brands Hatch’s grand prix circuit.

Sutton arrived with a ten point-lead and put himself in a strong position by qualifying third for the opening race, 14 spots ahead of Turkington. A damp race one was won by Aiden Moffat while Sutton finished where he started and Turkington could only progress to 15th.

With 22 points available per race, Turkington had to cut Sutton’s 24-point lead in the second encounter, which he did in fine style. Using the soft compound tyres Turkington’s BMW cut through the field rapidly, passing Sutton before arriving on the tail of Moffat. Turkington knocked his rival wide at Paddock Hill as he moved into the lead but his subsequent penalty – a £500 fine and three points on his license – meant he kept his win.

Sutton’s lead was therefore trimmed to six points ahead of the finale. Murray Walker was on hand to make the draw for the random reverse grid, which resulted in the title contenders starting alongside each other on row five. Conditions had deteriorated again as the grid formed up for the final start, Turkington ahead of Sutton but now carrying maximum success ballast.

The opening lap was a tense, nervy affair. But the title was settled the next time around. Mat Jackson was knocked wide at Graham Hill bend and clipped Turkington’s car as he rejoined, breaking its rear toe-link. Sutton was now guaranteed the title but regardless he came home third following a few hairy moments behind race winner Rob Austin and second-placed Jack Goff.

The EuroFormula Open Championship held two races at the Monza circuit for their sixth of eight events this season with the possibility of crowning a new champion. From pole position, Harrison Scott took victory for home team RP Motorsport, notching up his ninth win of the season with an unchallenged drive to the chequered flag. Nikita Troitskiy took second position and with it rookie honours, while Jannes Fittje completed the podium.

Scott qualified on pole position for the fifth consecutive time for the second race of the weekend, and another commanding performance meant he took the victory and with it the series title for 2017. While race one was relatively processional, Sunday’s race saw several incidents; off the line, Devlin DeFrancesco crashed to bring out the safety car, while Troitskiy suffered a puncture running in third which effectively ended his title bid. Thiago Vivacqua and Daniel Lu were both involved in clashes, resulting in the second safety car of the race. In the end, Scott took the win comfortably ahead of Fittje and Finn Simo Laaksonen.

For the next round, the EuroFormula Open competitors will be joining the Formula Two and GP3 paddock for their standalone event in Jerez.

Kyle Busch took his second win in a row as the first round of NASCAR’s ‘play-off’ series came to an end. The field of title contenders was thinned from 16 to 12 as Ryan Newman, Austin Dillon, Kasey Kahne and Kurt Busch dropped out.

The World Rallycross Championship travelled to the Estering circuit for the World RX of Germany. Mattias Ekstrom took his fourth win of the season, and his first in five months. He took the lead of the final in the first corner, beating Petter Solberg, who was competing mere days after undergoing surgery for broken ribs sustained in the previous round.

Timmy Hansen and Topi Heikkinen completed the top three, marking an end to the Volkswagen domination of recent rounds – newly crowned champion Johan Kristoffersson even failed to make the final after finishing last in his semi final when Kevin Eriksson spun, collection both the Swede and Sebastien Loeb.

Argentina’s premier touring car series Super TC 2000 visited the Autodromo de Buenos Aires Ocsar y Juan Galvez which is making a bid to return to the Formula One calendar 2019. The 200-kilometre race, run in treacherous conditions, was decided on a thrilling finale lap.

The Renault Clio of Emiliano Spataro and Christian Ledesma tangled with the Ford Focus Juan Angel Rosso and Sebastian Peluso as they rounded the quick left-right flick leading onto the lakeside loop. The Renault rejoined the track however and retook the lead a few corners from the chequered flag.

Max Verstappen comfortably won the Malaysian Grand Prix ahead of Lewis Hamilton and Daniel Ricciardo. Sebastian Vettel fought through from last on the grid to finish fourth before he was involved in a bizarre post-race collision with Lance Stroll.

Next weekend Formula One is at Suzuka and the following series are also in action:

This is a test link