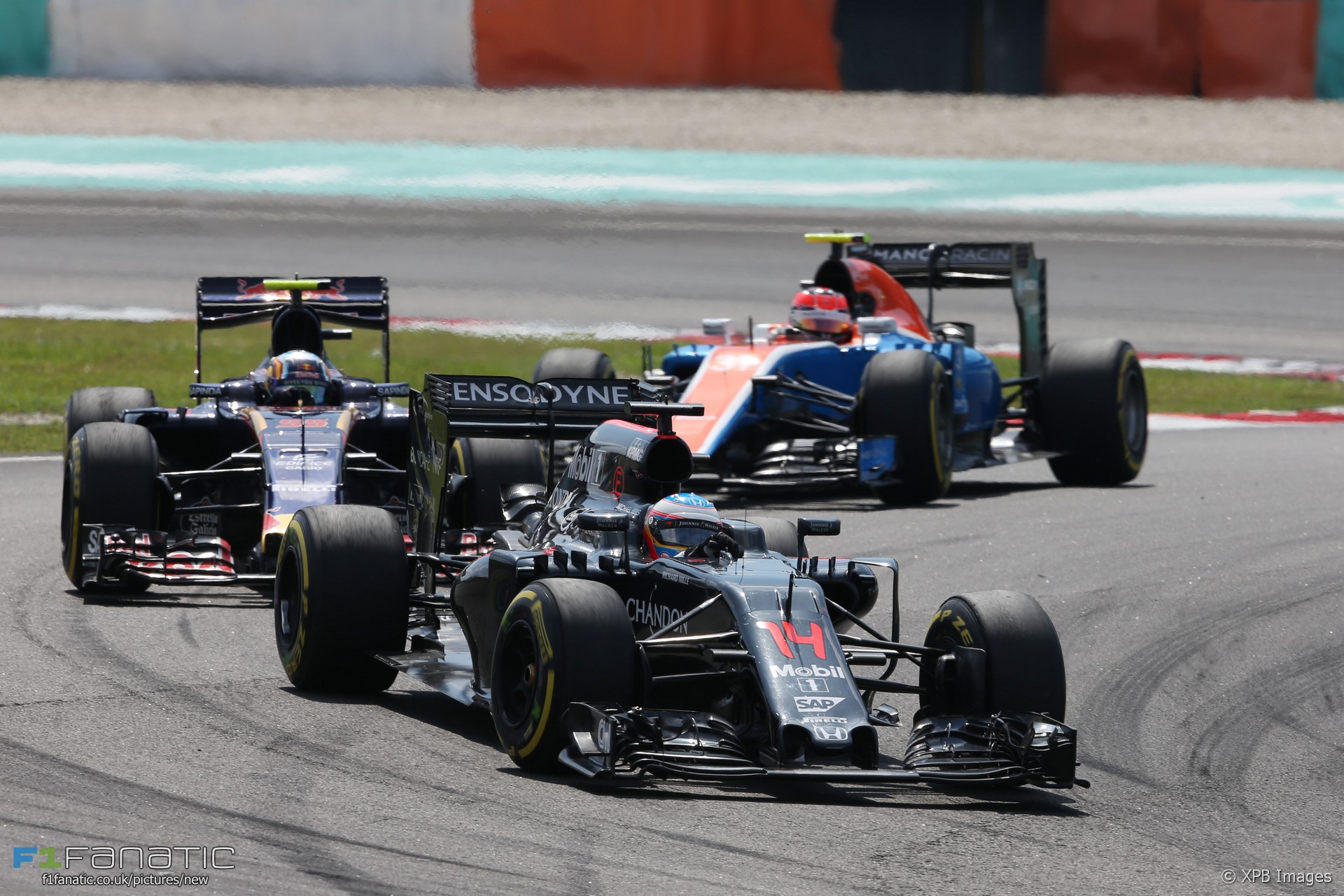 Fernando Alonso has won Driver of the Weekend for the second time in the last four races after climbing to seventh place in the Malaysian Grand Prix.

The McLaren driver started at the back of the field after his power unit was replaced for the event.

Alonso is the fourth different driver this year to win Driver of the Weekend more than once.

Honda’s decision to put their new power unit in Alonso’s car meant it was inevitable he would start the race from the back of the field. That so, he made only a token effort to qualify his car, ensuring he lapped within the 107% time and no more.

From 22nd on the grid he was up to 12th by the end of lap one, partly thanks to one of his trademark quick and opportunistic getaways, which was also aided by a first-lap tangle involving Sebastian Vettel and Nico Rosberg, and Felipe Massa starting from the pits.

Alonso had started on a fresh set of soft tyres. Sitting out qualifying had left him with a plentiful stock of fresh rubber, but when the Virtual Safety Car was deployed for the second time the team decided to take advantage of the chance to pit him while saving time.

McLaren wanted to extend this stint to put him in a stronger position for the end of the race, but Alonso reported back that his tyres wouldn’t last. He came in soon afterwards, but subsequently got his third and final pit stop done during another VSC period, saving him more time.

That jumped him ahead of team mate Jenson Button, who lost out when he pitted shortly before the final VSC. With a fresh set of soft tyres Alonso drew away from Nico Hulkenberg and had Valtteri Bottas and Sergio Perez in sight when the chequered flag came out.

Despite the engine blowing and not finishing Hamilton still deserves a vote. And despite Alonso not taking part in qualifying due to the grid penalty he also deserves a vote.

I can only vote for one. Hamilton was flawless. But Alonso defied logic with yet another jaw-dropping performance. That car deserved 8th if it had started there on the grid. He does this too often to be luck.
Philip (@Philipgb)

A McLaren-Honda scoring points from last place on the grid? Sure it’s another seventh but you have got to take those opportunities given as he does.

And like the man himself said on Twitter, from 67th (start position plus penalties) to seventh is a great drive.


I’m glad so many people noticed how good Alonso was.
Ia

Alosno jumping from 22 to 7 makes the Pi nerd in me happy.
Hardik Panjwani (@Scarlet-Fever)

Alonso only took a fairly small share of the votes. Most of the remainder were split between the two Red Bull drivers – with Daniel Ricciardo gaining most of them – and Lewis Hamilton.

Lewis Hamilton deserves it this weekend, seeing his engine give up with a 25 point penalty and a grand prix loss and a championship loss.

He left the Red Bulls in the dust and Ricciardo was closing up.
Michael (@Freelittlebirds)

Tough one. I voted for Ricciardo, as I felt he did fantastically – great on track defence and a fully deserved win.

Special mention to Verstappen for showing fairness in his battles, Alonso for shoving the McHonda into the points from last and Rosberg for actually fighting back from last – something I can’t recall seeing him do.

Had he finished the race I would have said Hamilton, for comprehensively outperforming Rosberg this weekend. Bottas had a blinder of a race but he was dire in qualifying, so I can’t chose him.

All things considered, I went with Ricciardo. The Honey Badger was in great form in the race, his pace was great from start to finish and his dogged fending off of Verstappen (who was on much fresher tyres) was superb. Dedicating the win to Jules Bianchi was a classy move too.
@GeeMac

To Ricciardo for holding onto his position through the sweeping turn five, not touching the sister car and being fair in his fight. Without that save, Ricciardo would have wounded up second.

More importantly, Red Bull would have been at a loss to explain to Ricciardo their ineptitude with his strategy when they have a chance of winning. He saved the skin of a lot of people there!

Alonso was great too. But the pure entertainment of watching that five-second clip of Ricciardo and Verstappen is the clincher for voting in favor of Ricciardo. Oh and what an atmosphere before and during the podium celebrations. Rare to see all smiles these days.
@Forcef1

I gave my vote to Jolyon Palmer. Kept his head under massive pressure to eke out a one-stop, for what could be a career-saving points finish
Pat Ruadh (@Fullcoursecaution)

But there was one driver who did not cover himself in glory: