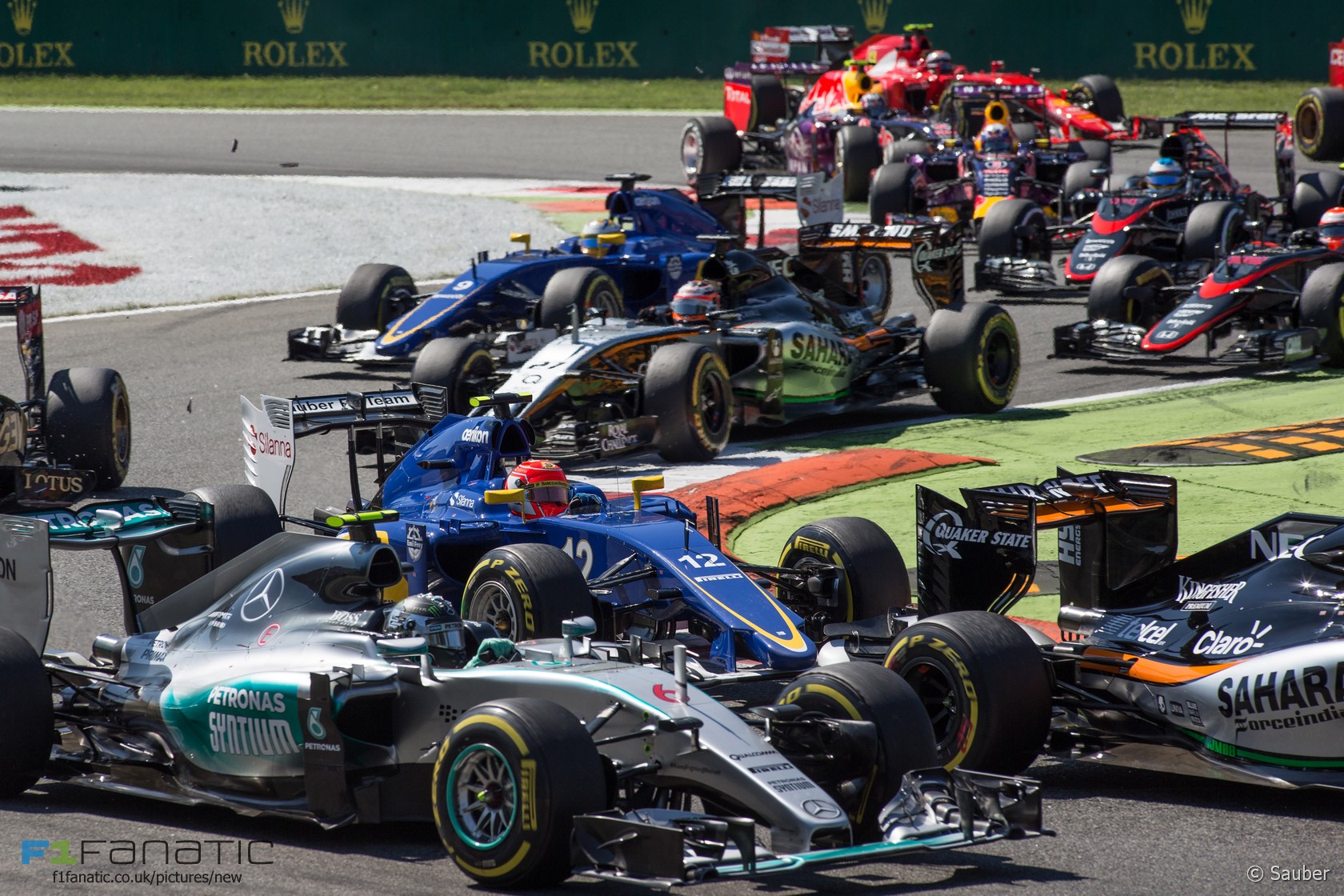 F1 returns to Monza, the ‘Cathedral of Speed’, where teams often bring specific aerodynamic packages exclusively designed for the long straights. Any car with the Mercedes power unit will also reap benefits here.

The future of the grand prix at Monza has not yet been secured, but talks between Bernie Ecclestone the organisers are expected to conclude this weekend. If they cannot agree terms, promoters for the Imola circuit have a contract with Ecclestone to step in from next year.

With Lewis Hamilton’s power unit stock replenished and both Mercedes drivers having taken six wins each, the run in for the 2016 drivers title effectively begins here, with a nine point advantage for Hamilton.

Hamilton has has taken both victories for Mercedes at this venue in the V6 era, with Nico Rosberg so far unable to challenge the Briton. This race was a turning point in the championship in 2015 as Hamilton took a lights to flag victory while Rosberg retired from third with engine failure, his title hopes going up in smoke along with his engine.

The low-drag efficiency of the Williams car meant they (albeit unofficially) broke the top speed record earlier in the year at Baku, a performance which could be repeated on the long straights at Monza.

Williams have enjoyed a lot of success in recent years in Italy, scoring podiums for Felipe Massa in 2014 and 2015. The Brazilian garners a lot of support from the crowd here from his years at Ferrari.

The first-corner collision at Spa and resulting damage to both cars concealed their ultimate race pace, with Sebastian Vettel assuring that a double podium finish was possible. And with an upgraded power unit believed to making a debut this weekend, Ferrari may be about to pull off one of their usual well-timed resurgences at Monza.

They need to, asa repeated warning from Ferrari CEO Sergio Marchionne that continued failure to deliver will result in high profile personnel changes will not have gone unnoticed ahead of the team’s home race in front of the devoted Tifosi.

Kimi Raikkonen squandered a chance of victory here last year when he failed to engage the clutch at the start which dropped him from second place to last. Sebastian Vettel has won three times at Monza, but never in Ferrari overalls, something which he has targeted this weekend to put behind him.

Max Verstappen has shouldered a lot of criticism over his driving standards in the aftermath of the Belgian Grand Prix. Even Christian Horner admitted his first corner move was “on the edge” and will “learn from it for future races”.

Daniel Ricciardo has played down his team’s chances this weekend, saying that Ferrari were likely to be ahead and has targeted Singapore and Japan as more likely candidates for success for the Red Bull team.

His pessimism is against the run of form though, with Red Bull taking two victories in the last five years here, whereas the last time a Ferrari driver stood on the top step was in 2010 for Fernando Alonso.

Force India have moved two points ahead of Williams in a tight battle for fourth in the constructors championship. Both teams have a design philosophy suited to the high speed Monza circuit, but it is Williams who tend to enjoy more success in Italy.

The team are confident that their good form shown at Spa will carry forward to Monza and challenge Williams again.

Last year the team scored a double points finish in sixth and seventh place, with Sergio Perez ahead of Nico Hulkenberg.

Kevin Magnussen has been cleared to race by the FIA following his high speed crash at Eau Rouge. Tests revealed no significant injuries, only some bruising to his left ankle.

There were signs of improvement at Spa, with both cars running in the top ten, but Monza will be a much more demanding test of the Renault power unit. A repeat of getting both cars into Q2 would be a good result for the team.

They will certainly be hopeful of a better finish than last year at Monza when both cars had to retire on lap one after suffering collision damage.

The team based in Faenza, just a short drive from Monza, enjoyed their one and only victory so far here in 2008 with Sebastian Vettel who mastered the tricky conditions to come out on top.

The feat is incredibly unlikely to be repeated this weekend as the ageing 2015 Ferrari power unit specification will severely hamper the car’s top speed and they may struggle to keep up with the pack, unless it rains again.

An increase in performance from a new development package in Spa was masked by Ferrari engine reliability problems for both cars, a misfire for Felipe Nasr meant that he could not finish ahead of Manor’s debutant Esteban Ocon.

A return to the low downforce configuration last seen in Baku might be welcome for Sauber, where Nasr secured a strong 12th place finish.

Honda were supposed to struggle at Spa due to their lack of ultimate power, but Fernando Alonso was able to benefit from the chaos ahead and a timely red flag to leap into the points, which he was able to defend until the end.

The secret to his success was the middle sector, where his stable chassis through the high speed corners allowed him to build up a buffer to the chasing Williams each lap. A repeat performance will be tough to achieve at Monza as there are no high speed technical corners where the McLaren chassis can provide an advantage.

A simple error from Pascal Wehrlein on lap one at Spa denied us the opportunity to properly compare the two young Mercedes protégés in race trim. Esteban Ocon performed admirably in his first weekend for Manor and should only get stronger as he settles in to the team.

The high speed nature of the circuit will allow Manor to stay closer to the back of the pack than previously where downforce has been more critical.

Italy is a second home for the Haas outfit, with Ferrari providing power unit, gearbox and technical support, while the Dallara chassis design team originate from Parma.

The gap ahead in the championship to Toro Rosso is only 17 points and Haas are confident of closing them down in the remaining races, looking to capitalise on their power unit advantage.

Are you going to the Italian Grand Prix?

If you’re heading to Italy for this weekend’s race, we want to hear from you.

We’ve got a dedicated group and forum for people going to the race.

You can embed your pictures from the race via Flickr and videos via YouTube and other major video-sharing accounts. Join in here:

Who do you think will be the team to beat in the Italian Grand Prix? Have your say below.

Being pelted by rain on his first visit to an F1 race at the 1998 British Grand Prix wasn't enough to dim Chris's passion...
Read more about Chris Turner, find all their articles and get in touch with them