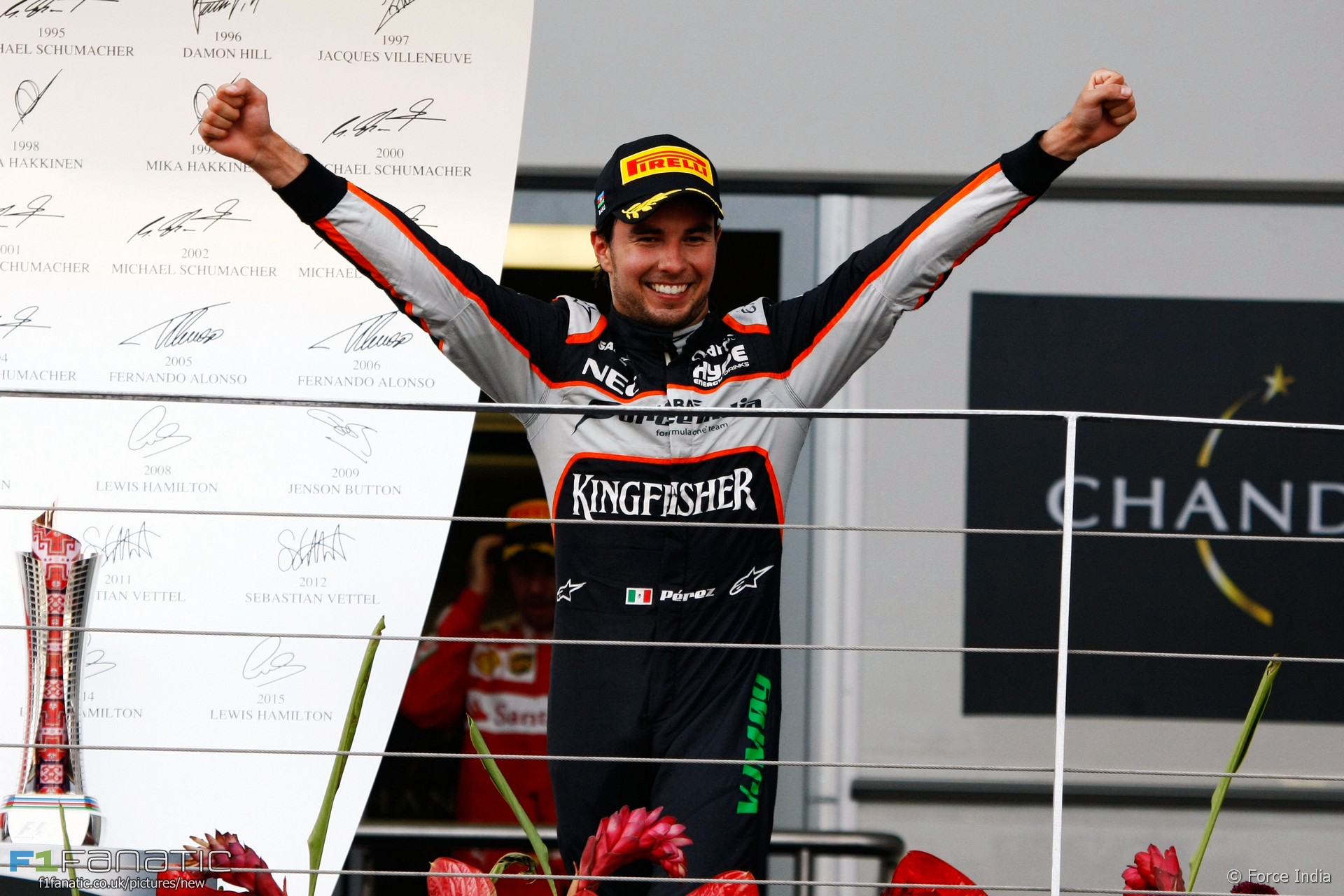 Sergio Perez was emphatically chosen as the Driver of the Weekend for the European Grand Prix, taking over two-thirds of the vote.

Perez has been voted Driver of the Weekend three times in the last 13 grands prix. He also the polls for the 2015 Russian and 2015 Abu Dhabi races.

Race winner Nico Rosberg was the only other driver to take a significant share of the vote.

It was clear throughout practice Force India were on course for one of their strongest weekends of the year. Perez featured inside the top six in each of the three sessions and was third on Friday afternoon.

But he made his most significant error of the weekend during the final practice session, running wide at turn 15 and hitting the wall. He paid a price for his mistake: Force India had to fit a new gearbox to his car which meant a five-place grid penalty.

Perez didn’t let this setback affect his performance and produced the second-quickest time in qualifying – beaten only by Rosberg’s Mercedes – to ensure he’d start the race from seventh.

He made up two places in the opening laps and gained a further place from Daniel Ricciardo as the Red Bull had to pit twice.

From then it should have been a case of driving until the end and keeping within five seconds of Kimi Raikkonen in order to benefit from the Ferrari driver’s penalty. But Perez had other ideas, passing Raikkonen on the final lap and crossing the line to take third in a Force India that hasn’t often showed the pace to match Ferrari or Red Bull so far this season.

Did a great job in qualifying and the race as well. Two podiums in three races. Making best use of the pace in the car. Did crash in FP3 but don’t think he missed out on anything because of that.
@Evered7

That car isn’t terrible but it’s not really podium quality, either. Should have started second if it wasn’t for the crash and then fought his way back up to third – far and above what the car is capable of.
Adam (@Rocketpanda)

Second before before his penalty and finished third on merit, never looked slower than cars behind him which includes Hamilton, Ricciardo, Bottas, and Raikkonen. Looks he still has some speed left, too bad there’s no Hamilton in his back to push him further.
@Sonicslv

Winners and losers in Baku

Rosberg was a distant runner-up in the voting despite achieving a ‘grand slam’ of pole position, fastest lap, leading every lap and winning the race.

Rosberg was faultless again. Unlike his team mate, he didn’t put a foot wrong all weekend, he took advantage of everything happening around him and drove perfectly to the win. It was easy, sure, but he made it work.
@Fer-no65

Meanwhile neither Perez or Rosberg’s team mates fared well, Nico Hulkenberg failing to even pick up one vote a year on from his Le Mans 24 Hours victory.

I remembered Perez making that final pass even if he didn’t need to. Great qualifying, great race and he’s starting to make Hulkenberg look average.
@Philipgb

13 comments on “Podium earns Perez Driver of the Weekend win”