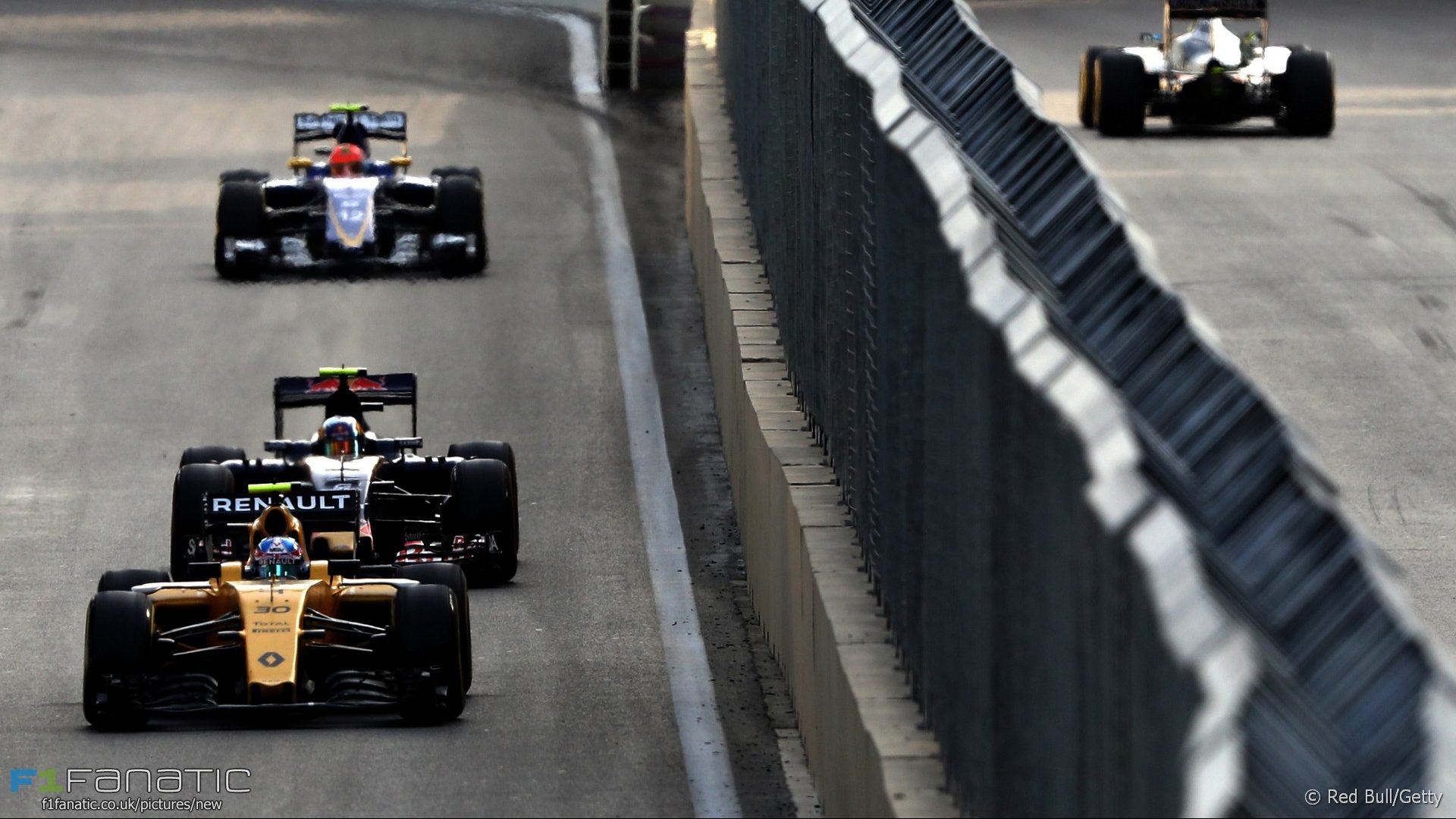 Azerbaijan’s first grand prix was ranked among the ten worst races since the 2008 season by F1 Fanatic readers.

The inaugural race on the Baku City Circuit earned an average rating of 4.7 out of ten from F1 Fanatic readers, the lowest of the season so far.

Expectations had been high after two incident-packed GP2 races and a surprise in qualifying as Lewis Hamilton hit trouble. So what went wrong? Here’s what you had to say:

No Safety Car? I don’t know the odds of that happening before the race, but I think it’s a subtle hint to the fact that the drivers are having to manage their cars for two hours rather than racing hard.

I know ‘the formula’ is dynamic and subject to evolution, but for me, this grand prix is a manifestation of everything that is wrong with F1 today.
Andy (@andybantam)

The lack of incidents during the race drew many comments. Did it reveal the better standard of driving among F1 competitors compared to their GP2 counterparts? Was it because F1 drivers get five hours of pre-race practice compared to GP2’s one-and-a-quarter?

Or was it simply because F1 drivers were conserving their tyres and fuel loads?

I think everybody expected madness like in GP2, myself included. Just goes to show how high the driving standard in F1 is, when there is not a single Safety Car (virtual or real) over the course of 51 laps when GP2 has six or more (at some point I stopped counting) in 50 laps combined.

We should also take into account that we’ve been spoiled by the start in Canada. I expected something similar and thus a proper fight for the lead but that never materialised once the red lights got out. As soon as Rosberg was into the lead after lap one, this race was done and dusted.
@Wallbreaker

It was never a well thought out track, though. A series of straights that are easy to overtake on with DRS and a twisty section you can’t do anything but follow in doesn’t generate much but procession from the most professional drivers. With less professional drivers, you just get chaos as we saw in GP2 (and Nobuharu Matsushita deserves that ban).
Craig Wilde (@Wildfire15)

I think the track itself is really good but the DRS ruined the race as there was no real racing/overtaking.

I also think how far off the pace there driving managing tyres/fuel resulted in drivers pushing less and making fewer mistakes which also didn’t help.
@Stefmeister

GP2 might have set entertainment-expectations high, or driving-expectations low, but the drivers were too perfect today.

Apart from that, strategies were unimaginative, overtakes were DRS-aided and that’s it. Excluding, relatively speaking, Hamilton and Perez, the result was predictable, i.e. the usual suspects ended ahead. I was hoping and actually thought this was going to be the most unpredictable race ever… but it wasn’t.
@Fixy

It seemed many drivers were able to overtake on the main straight without needing the first DRS zone, let alone the second:

DRS was utterly destructive, and then a second DRS zone. Pathetic.
@Psynrg

Whether or not the track was to blame, F1’s radio regulations came in for some criticism as Kimi Raikkonen and Hamilton hit trouble.

What a joke of a race. Instead of clean racing we witnessed the effects of idiotic regulations, two drivers struggling because of wrong engine settings. Raikkonen even lost the podium because of it.
Kostas K. (@Charlie2alpha)

For the first time in five years an F1 round clashed with the Le Mans 24 Hours. The chequered flag fell at La Sarthe while the F1 cars embarked on their formation lap, but there was rather more excitement around the finish in France:

After following the vast majority of the Le Mans race this year I watched the F1 thinking it would complete a nice day of motorsport.

I got very bored very quickly with the track, just a follow my leader round the vast majority of it until the DRS zones appeared – all in all a terrible race on a very poor track. Lots of 90 degree corners then a pointless narrow section where none of the camera angles seemed to have been thought out to give any excitement killed it for me.

Le Mans kept me enthralled for 24 hours… this GP kept me vaguely interested for 20 minutes at most then I gave up and watched on fast forward.
@Wonderbadger

Did it look better from the stands? We found at least one person who was there:

Deliberate tight shots of the grandstands avoided showing the lack of any fans that could have stayed awake until the all too predictable finish. Bernie’s ability to woo the politicians to sign up for the circus never fails to impress.
Krend

I was at Khazar grandstand and the place was packed. Lots of Russian folks. Many didn’t bother to stay for free Pharrell Williams after-show, so they seemed to be there for the race. But the race itself was so dull, I almost fell asleep by lap 25, under all that scorching sun.
@zimkazimka

Baku has replaced Valencia as the home of the European Grand Prix but it may not change this race’s reputation for tedium:

I think it’s just another example that a track doesn’t significantly contribute to a good racing. It’s the cars and its aero effects that dictate a good or a bad race.

Your verdict on Baku

What do you think of the Baku City Circuit? Add your vote here:

Rate the Race appears immediately after every grand prix finishes. To join in simply register a free F1 Fanatic account. If you do not have one, register an account here or read more about registering here.