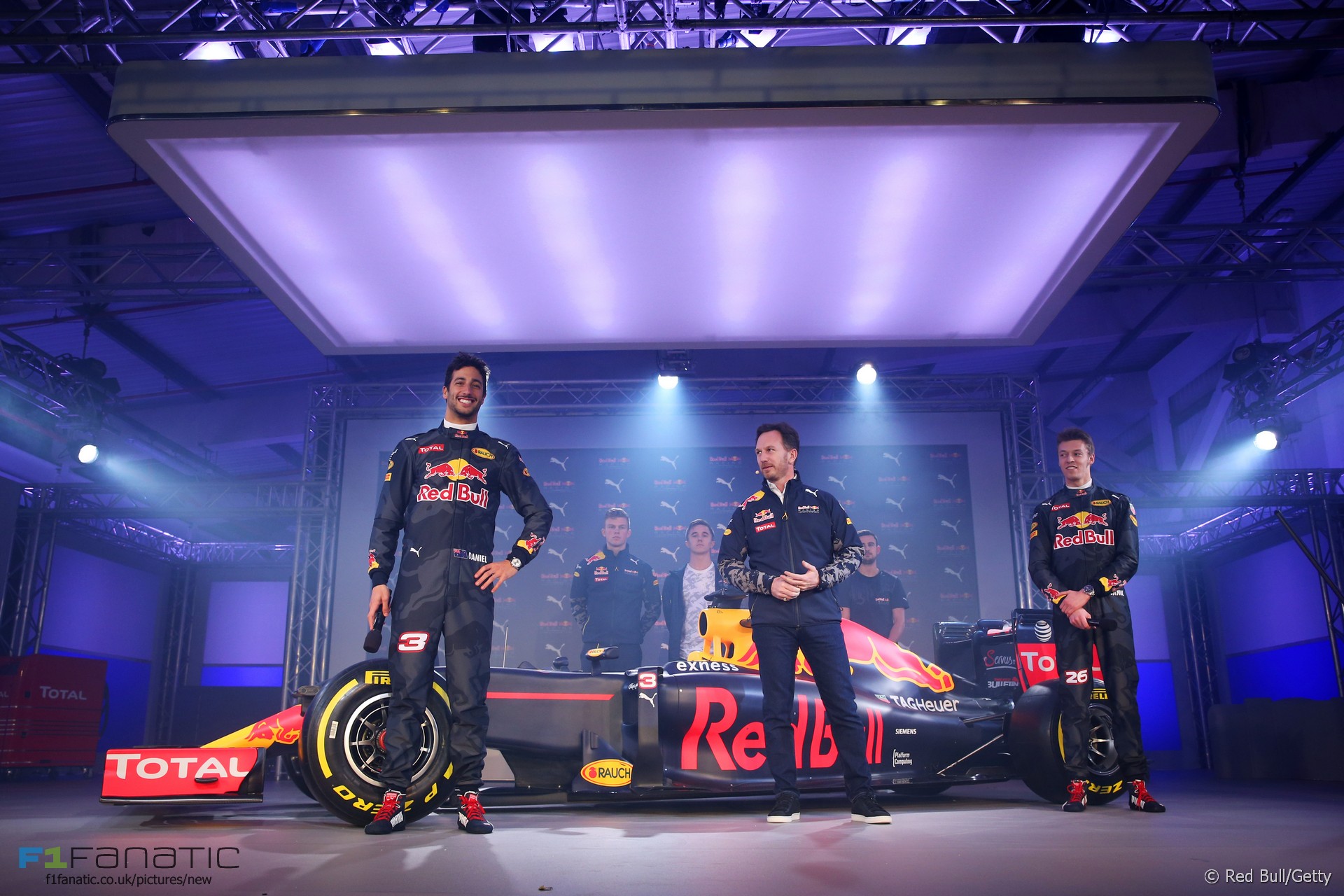 In the round-up: Christian Horner wants firm leadership from F1’s regulatory and commercial bodies to push through new rules for next season which will make the driver’s role more significant.

Ferrari will become the first team to launch their new Formula One car later today. Just three days later we will have seen all bar one of the 11 different cars which make up this year’s grid. The first day of testing begins on Monday as the 2016 season finally sparks into life.

It’s going to be an extraordinarily busy time and F1 Fanatic has a few changes planned to keep on top of it. Photographic agency xpb.cc will be supplying us with top-quality photographs from the test and launches, and Will Tyson is coming on board to contribute a series of new technical features – see his blog theWPTformula here.

These new features require investment and it’s thanks to the support of F1 Fanatic’s many loyal readers that the site continues to grow. Once again I have to thank everyone who has become an F1 Fanatic Supporter or donated to F1 Fanatic – a few have even done both!

I’m very pleased to see the site continue to increase in popularity, and I hope you appreciate these latest additions. If you would like to contribute to F1 Fanatic you can find out more information here:

"I think this is where we need strong governance and clarity from the commercial rights holder and the governing body to say these are the regulations we want to address the sporting spectacle moving on from 2017."

Testing, testing: watch out for Ferrari, Red Bull and new kids on the F1 grid (The Guardian)

"The drivers need to be a bigger differential within the whole package. And we have a great opportunity to address that for 2017."

"It's not taking away anything from the driver in terms of courage or anything like that, it's a simple little benefit that we can all gain from and no one wants to see another fatality, so if we can minimise the risk then why not?"

"Red Bull is making another submission for a canopy that we believe will be a safer option. It’s more of a canopy than a Halo."

"The implications have been enormous. Everyone has worked incredibly hard for two to three months to get this together."

"Toro Rosso has bolted in 0.8 seconds into their car through a different power unit,” the Red Bull team principal told reporters at the new livery launch in London. That is a significant amount of performance."

"If I can get down to 67-68kg and still be healthy then it's okay. But it is starting to get on the low side."

Between them Manor's 2 drivers have 36 of the 40 superlicence points needed to race in #F1: https://t.co/4IqAGiYbUN pic.twitter.com/blGaP3zptq

Thank you for your incredible support& @ManorRacing for the opportunities given;positive news coming soon #StayTuned pic.twitter.com/kNyC1u5tVX

Haryanto's manager Piers Hunnisett said Manor "chose Rio on the merit which is his results last year" but clearly looking for more funding.

"The more money I can try to help them find whether it is from Indonesia or even from Southeast Asia, it is better for the team…

It's been a great day here in Jakarta. I'm truly touched by the tremendous supports from Indonesia and others who supported me.

I can't imagine how much money has been drilled into this if he's doing the first 2016 outing! #beyondajoke https://t.co/5i0CMOXcHQ

Evans to Button on Top Gear role: "We were close weren't we?"
JB: "I know. Yeah, we were."
CE: "I think that helped with your McLaren deal."

"Hopefully when it's in the rear view mirror of some of the cars ahead it'll definitely get noticed." Horner has high hopes for 2016… #F1

I’m not trying to defend Haryanto in this matter, but let’s take our opinion at Manor’s perspective.

Formula One is always about sport and business. Like a coin, there is always two side in each of them. So what’s Manor business with Haryanto, anyway? Well, as far as I know, with Eurozone is in deep economic crisis and North America is not even better, Asia is big and lucrative market for F1. Did we see any Asian driver in F1 recently? Nope. So, how we could attract new viewers from Asia (South East Asia, for instance)? Easiest answer, is to put any Asian driver on the cockpit.

But why choose Haryanto, instead of other driver? First, he is Asian, second, he has the budget, and third, he has decent achievement (no need to be flashy, but OK). Manor knew that Haryanto meets this specification, and would be perfect (for business) if they named him for their driver. In time, if Haryanto finally could prove himself worthy, It’s a great bonus for Manor reputation.
David Adrian

Happy birthday to Stephen South who is 64 today. South made a single entry into the world championship at Long Beach in 1980, substituting for the injured Alain Prost, but failed to qualify.