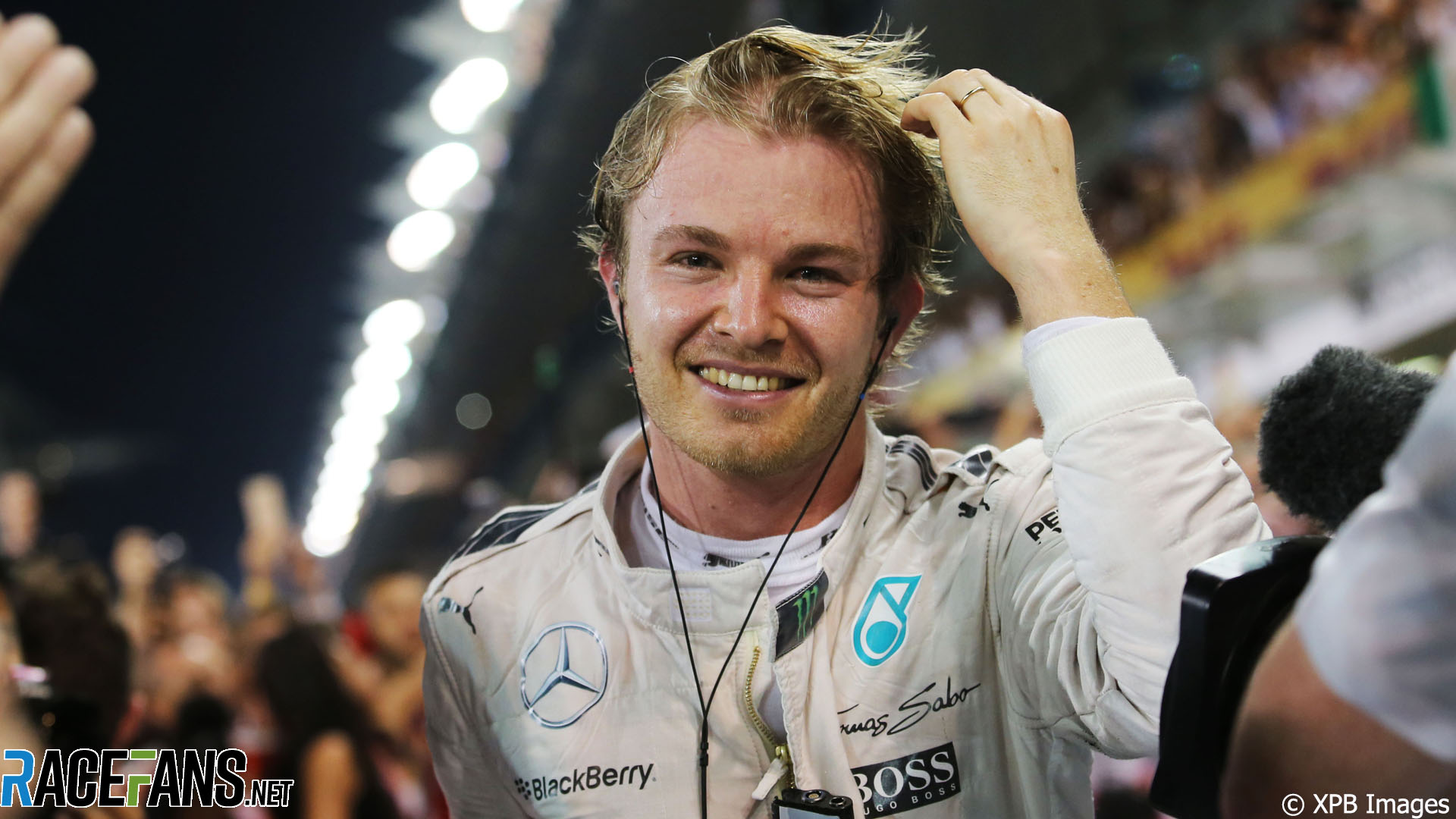 Lewis Hamilton had already won the war in 2015 by clinching the championship.

But as the season came to a close his team mate Nico Rosberg was winning the battles: the season-closing Abu Dhabi Grand Prix was his third consecutive race victory.

The two Mercedes lined up on the front row just as they had 12 months ago, when a sluggish getaway from Rosberg put Hamilton on a course for victory and the championship. But this time it was Hamilton who started slowly. His team had urged him to point his car to the right from his grid slot in order to get onto the grippier side more quickly, but even so he found himself having to fend off Kimi Raikkonen’s third-place Ferrari.

But even once that was done Hamilton could only watch his team mate edge away. On Friday Rosberg had been able to make the super-soft tyre work far better than his team mate, and little seemed to have changed since then. Fortunately for Hamilton both would discard it after a single stint.

Rosberg and Hamilton, along with the pursuing Raikkonen, remained on the super-softs for a few laps longer than most of the other drivers who used it for the first stint. Ninth-placed Daniil Kvyat was the first of the two-stopping drivers to come in, Red Bull as usual playing to their strength in being able to make the tyres last over the longer subsequent stints.

The cars ahead of him followed over the next laps, and on the eighth tour Valtteri Bottas was among those in. The Williams driver was outmanoeuvred by his rivals at the start and fell to tenth place, but it was this pit stop which truly ruined his race. His crew sent him out just as Jenson Button was arriving, the pair collided and Bottas lost his front wing. As well as making an extra pit stop to replace it he was slapped with a five-second time penalty, and any chance of protecting his fourth place in the championship from Raikkonen was now gone.

Fernando Alonso was another driver enduring a difficult day, though his was largely self-inflicted. At the start he squeezed Felipe Nasr, ricocheted off the Sauber and skidded into Pastor Maldonado, ending the Lotus driver’s race. Despite protesting Nasr had been at fault, Alonso was handed a drive-through penalty.

On a weekend when his team owner had suggested to the media Alonso might not race next year, his subsequent radio comments gave further indication that his dissatisfaction with F1 has reached new heights. “If we don’t have a Safety Car I will retire the car,” he said, though he did not make good on his threat having been given a set of super-soft tyres to wield in the final few laps during which time he set the third-quickest tour of the race.

His mood can’t have been improved by being lapped again by the two drivers from the team he quit last year, Ferrari. “He must really hate me,” sighed Vettel after losing a second behind the McLaren.

Three years ago Vettel had begun his Abu Dhabi Grand Prix in the pit lane and still made it onto the podium. He doesn’t have the same kind of car advantage these days, of course, and nor were there any fortuitously-timed Safety Car periods.

Nonetheless having failed to progress beyond Q1 following a Ferrari blunder and starting from 15th on the grid, he quickly worked his way forward. What was most remarkable about this was he did it with very few overtaking moves after lap one, which he completed in 12th place.

Vettel began the race on the soft tyres and vaulted to fourth as early as lap nine when most of his rivals made for the pits. By the time his tyres had begun to fade on lap 23 he was able to make it in and back out again having only lost two places to Sergio Perez and Daniel Ricciardo.

After a brief stint on the soft tyres Ferrari spied the opportunity to bring him in for a set of super-softs, get him out right on the tail of the pair and use the tyre advantage to pass them. That done he was able to manage the graining on his tyres until the chequered flag fell.

Perez was able to control his tyre degradation sufficiently to keep Ricciardo behind, but his team mate had already fallen victim to the Red Bull earlier in the race. Despite being able to re-pass the Red Bull in the DRS zone, Ricciardo was able to brake far deeper at turn 11 and reclaim the spot.

Kvyat’s sister Red Bull was compromised in the second half of the race. “Almost every lap we had to do something about our electronic issues,” he explained after being pushed down to tenth place by Felipe Massa and Romain Grosjean. The latter had started near the back on soft tyres like Vettel, and in the final stage had Hulkenberg, Massa, Kvyat and Carlos Sainz Jnr bottled up behind him before being passed by all four when pitted for super-soft tyres. He was able to re-take the latter pair.

This meant a battling drive by Sainz went unrewarded with a point-less 11th place. He had passed the Williams pair around the outside of turn four at the start and briefly held seventh, but he was easily overtaken by Massa and then lost time at his first pit stop.

At one stage he had to let his team mate past too, but Max Verstappen was destined to finish behind him after locking up his tyres at turn eight, necessitating an extra pit stop. He made matters worse by picking up two penalties, both of twice were applied post-race leaving him 16th.

The two Toro Rossos were separated by Jenson Button, who was pleased to have held off the Williams of Bottas, followed by the two Saubers. Alonso took 17th with the Manors behind him.

Hamilton’s wish for an alternative strategy that might help him take on Rosberg had gone unrewarded in Mexico and Brazil. But in Abu Dhabi, with less pressure from Ferrari behind, Mercedes granted him more leeway. The gap Rosberg had built during the super-soft stint was erased by Hamilton in their first run on soft tyres – he was just poised to get DRS when Rosberg headed for the pits.

However Hamilton wasn’t sure which way he wanted to go on strategy. He asked his team if he could avoid pitting altogether and simply nurse his current set to the end, but by that time even if he had been able to sustain his existing pace there’s little doubt Rosberg would have caught him well before the end of the race with enough of a performance advantage to pass him with ease. “It wouldn’t pay off,” his race engineer Peter Bonnington insisted, “I guarantee it.”

He eventually pitted with 14 laps to go. “This is the optimum lap for our stop,” Bonnington told him. “The gap will be eleven seconds but we’ll have ten-lap newer tyres.”

But his fresher tyres only gave modest returns compared to Rosberg’s. “We need mid-to-low 44s,” urged Bonnington. “Well I can’t do that, Bono,” he replied. He only made it as low as 1’44.5 once, even as he tested his team’s patience by running in a higher engine mode than he was supposed to.

“Strat mode ten,” said Bonnington firmly, “if you do not comply then we’ll just let Nico have strat mode six.” It seems he did not – Bonnington was soon back on the radio insisting “strat mode ten, that is an instruction,” while Rosberg was given the instruction to use mode six. If Hamilton was hoping this would overtax his team mate’s older power unit it did not – although Rosberg reported a vibration at the back of his car as he began his final lap.

Since Hamilton clinched the title in Austin, Rosberg has managed to achieve something which eluded his team mate this year – win three consecutive races from pole position. And this latest triumph will have been all the sweeter for doing it with an engine disadvantage, however slight, and at the track where he lost the championship last year.

Afterwards he beamed he was “ecstatic” with the result. “I really master-managed, controlled the pace through the race and managed my tyres and used them optimally and pushed all the way through to the end – and had a lot more laps on them than Lewis’s.”

Rosberg unsurprisingly added he would be happy to begin the 2016 season tomorrow. Hamilton, however, cannot afford to ignore the fresh threat from his team mate.

Whatever the explanation, Rosberg’s season-ending form offers hope that even if the opposition don’t turn up with better cars next year we could still see a closer championship fight next time.