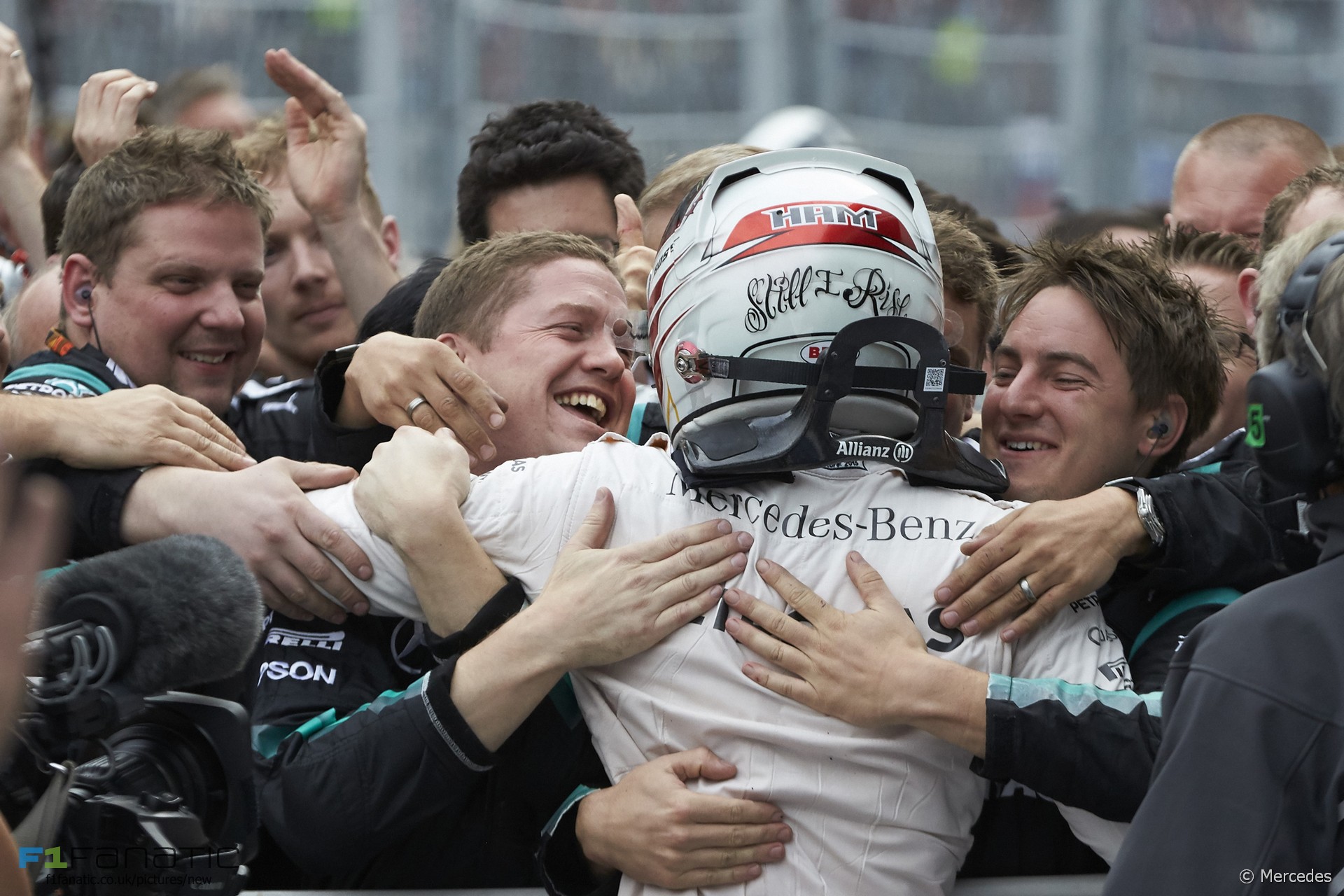 Nico Rosberg could be forgiven if he was the one Mercedes employee who didn’t fully enjoy his team’s constructors’ championship success in Russia.

Because while their latest success had decided one championship, a failure on one of the team’s cars effectively ended the competition in the drivers’ title fight too.

While Rosberg’s W06 let him down within a few laps of the start Lewis Hamilton’s took him to his ninth victory of the year, and he could wrap the drivers’ title up as early as the next race.

For a few minutes it looked like we finally had a fight on our hands. Just as in Japan, Rosberg had made the best use of a curtailed practice programme and beaten Hamilton to pole position. But unlike in Japan he came out of the first corner still in the lead.

Hamilton was tucked up in Rosberg’s slipstream as they came out of the awkward turn two. But around the long, 180-degree turn three Hamilton washed out wide and his attention turned from attacking Rosberg to protecting his position from Kimi Raikkonen, who had claimed third place.

Suddenly the fight was off. Nico Hulkenberg had dropped his Force India at the first braking point and been collected by an unlucky Marcus Ericsson. Rosberg reacted fractionally quicker than Hamilton to the Safety Car boards and the two Mercedes almost made contact.

For the first time since Austria, Rosberg made it to lap two in the lead of a race with Hamilton still behind him. Unless Hamilton could ‘over-cut’ him in the pit stops or – even less likely – overtake him on the track, he was surely on course for a win.

But before the Safety Car period was over Rosberg’s throttle had begun to stick. When the race restarted the problem worsened to the point that he had to lift his leg entirely clear of the pedal, which interfered with his steering.

With the fault worsening, Rosberg headed for the pits, leaving his team mate to inflict maximum damage on his fading championship hopes.

Bottas made a textbook restart and, aided by the superior straight-line speed of his FW37, reclaimed third place from Raikkonen. Vettel also tested his team mate’s defences, but that came to a stop when the Safety Car made a second appearance.

Romain Grosjean’s race had come to a violent end against the barrier in turn three. The Lotus driver had tangled with Max Verstappen on lap one and pitted for a new front wing. Meanwhile Jenson Button, having attained the heights of ninth soon after the start, inevitably found his gutless McLaren being passed by car after car.

By lap 12 the man on his tail was Grosjean. The Mercedes-powered Lotus was hauling in the McLaren in the long turn three, but a combination of the disturbed air and slippery off-line marbles did for Grosjean. He slammed sideways into the Tec-Pro barrier, and the Safety Car was summoned while the marshals patched it up with tape.

The final restart came at the end of lap 16 and Vettel struck immediately against Raikkonen. His team mate initially held the position by cutting across turn two, but after initially asking his team if he should give the place back Raikkonen swiftly decided it would be the prudent thing to do.

Hamilton set about restoring his lead over Bottas, pursued by the Ferrari pair, followed by Daniil Kvyat. Before the Safety Car period the Red Bull driver had been giving chase to Sergio Perez while the second RB11 filled his mirrors, but Kvyat saw both his companions make for the pits when the race went yellow.

Kvyat now had the two Felipes behind him, Nasr ahead of Massa, the latter having started on the harder soft-compound tyres and therefore having recovered useful ground when the Safety Car came out. Behind him was Perez – and it soon became clear Force India had played a blinder by bringing him in.

Bottas only made it to lap 27 before he had to pit. He lost time passing Carlos Sainz Jnr and that ultimately allowed Vettel to jump him when he came in four laps later. Ferrari almost managed to get their second car ahead when Raikkonen pitted on the next lap.

Vettel immediately passed Perez to get himself free of the Safety Car stoppers, but Bottas and Raikkonen were queued up behind Ricciardo as well as Perez. It took Bottas until lap 45 to squeeze past Ricciardo, after which he rapidly gained on Perez. When the Red Bull driver’s suspension failed Raikkonen also went by, and joined Perez and Bottas in a three-way fight for the final podium position.

On the penultimate lap, with the aid of maximum power boost from his engine and the DRS zone approaching turn 13, Bottas got by Perez for third. Raikkonen followed the Williams through, and it seem Perez’s delicate coaxing of his tyres would not yield a podium finish.

That would surely have been the case had Raikkonen not made a rash move to pass Bottas at turn four on the final lap. It never came close to coming off – the Ferrari’s front-left wheel hit the rear-right of the Williams and sent Bottas into a barrier. A gleeful Perez reclaimed his lost third place while Williams urged Massa to salvage fourth from the Ferrari.

Raikkonen took the chequered flag in fifth place but a 30-second penalty after the race relegated him to eighth. Despite that, clattering into Bottas had paid dividends for the Ferrari driver. Had it not been for the collision Bottas would have closed within five points of him; as it was, Raikkonen was three points better off.

A minor worry over his rear wing was all that troubled Hamilton as he collected his ninth win of the year: Mercedes briefly warned him not to use DRS, not that he ever needed it. Behind him Vettel might have had a flashback to Singapore when he spotted a marshal on the track at turn 14.

The marshal was collected part of Sainz’s rear wing, which had dislodged after he spun off at turn 13 – the same place where he crashed at huge speed on Saturday. Sainz had been on course for a solid points finish but despite several warnings from his team he was unable to keep his brake temperatures down. They cried enough with eight laps to go.

Sainz’s demise was one of five places Massa picked up in the last nine laps. Behind him Kvyat was promoted to fifth by Raikkonen’s penalty, which also benefited Nasr (sixth) and Pastor Maldonado (seventh).

The two McLarens initially completed the top ten but Fernando Alonso lost the final point when he was given a five-second penalty for cutting turn 16, something he had been warned about during the race. Verstappen was the beneficiary.

It wasn’t until an hour and half after the race, when Raikkonen’s penalty was handed, that Mercedes learned they had successfully defended the constructors’ championship title which they first won at the same venue 12 months ago.

While that championship is settled, the drivers’ contest now looks a foregone conclusion. All year long Rosberg has had the equipment to rival Hamilton but his performance has too often come up short. Unluckily for him, this time it was the other way around.